Facebook Inc. (Nasdaq: FB) didn't announce any FB stock split news in its Q4 2016 earnings report, further indicating it may not happen in 2017.

But if you are a FB shareholder, it's important to know that a Facebook stock split has been approved and will happen. It's just a matter of when.

But when shareholders receive Class C shares, they will not have any voting power.

Some investors don't like this, as they feel nonvoting shares won't allow them rights to voice their concerns.

However, CEO Mark Zuckerberg owned roughly 60% of the voting power before the split was approved. That means no matter how shareholders voted, Zuckerberg would always have the final say. Essentially, nothing is changing from a voting standpoint.

So for FB shareholders now, the most important issue to focus on is what will happen on the Facebook stock split date. 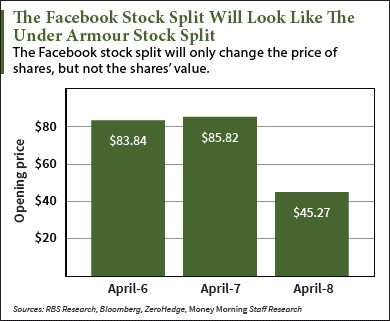 That's because it may appear shares were cut by a third overnight. But in reality, the value of FB shares will remain the same.

The value of UA stock was the same, it was just the price that had changed.

And on the FB stock split date, it will look similar to Under Armour's split, except it's a 3-for-1 split.

But you don't want to wait to buy FB stock just because it "appears" cheaper.

How will the facebook stock split effect the stocks value in five years?

Is stripping minority shareholders of their right to vote even legal? If it was every founder would do this and retain control even if they "sell" the company. I smell a class action suit coming on once the split gets executed.