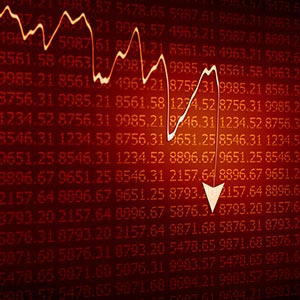 The Dow's record-smashing rally is still going, as the index closed at an all-time high for the tenth time in a row yesterday (Feb. 23). But the soaring highs have some investors wondering, "Will the stock market crash soon?"

But surging stock prices could be a sign that a stock market crash is coming.

And we see other signs that the stock market is too high.

We want you to be prepared for every possibility at Money Morning. Before we show you how to protect your money from a stock market crash in 2017, here's why the market could crash...

These Signs Point to a Stock Market Crash Coming Soon

But what caused this historic stock market crash?

Stocks soared to record highs during the 1920s. During the Roaring '20s, investors even began to believe the stock market would never fall. That's why they took dramatic risks to buy more and more stocks, pushing prices even higher.

For instance, average investors borrowed $120 million in today's money to purchase stocks ahead of that crash. This was far too risky, but investors believed stocks would only go up. And if that was the case they'd be foolish not to take advantage of it.

But stock prices propped up by exuberant buying eventually fell. When they did, investors panicked. The massive sell-off that followed crashed the market and left investors holding worthless stocks. They were also unable to pay back their debts.

The same scenario unfolded more recently. The stock market crash of 2008 was the result of another bubble inflating prices beyond their real value. This time, the housing market led investors to believe housing prices would always rise.

Banks were willing to lend to even the riskiest of borrowers. And average home buyers were taking more risks themselves by buying homes more expensive than they could typically afford.

And when housing prices fell, the stock market crashed. On Sept. 29, 2008, the Dow Jones Industrial Average fell 7%, the largest single-day loss in the indexes history. The Dow would lose 56% of its value by March 2009, wiping out $2 trillion in retirement savings.

Now we are seeing similar signs leading to a stock market crash in 2017. Here's why the stock market is too high...

After the 2008 stock market crash and ensuing recession, the U.S. Federal Reserve slashed rates to historically low levels. Interest rates fell from over 5% to 0.25% in 2008. They have remained under 1% since then.

Since 2008, U.S. companies have borrowed $1.9 trillion, but they've bought $2.1 trillion of their own stock shares. Share buybacks have helped send stock prices soaring.

That's how the Dow has grown nearly 200% since March 2009, while the economy has only grown 30% in the same time period.

But low interest rates are coming to an end.

The Fed raised rates twice since 2008, but they are still below 1%. However, at the December FOMC meeting, the Fed indicated it would be raising rates three times in 2017. That means rates are heading above 1% for the first time since 2008.

That's why investors should be prepared for a 2017 stock market crash. But we are here to help with a stock market protection plan that will help you prepare for the worst.

Here's how to protect your money during a stock market crash...

How to Prepare If You're Wondering "Will the Stock Market Crash?"