For silver prices in 2017, it's looking like history is rhyming – if not repeating – last year…

That's because the precious metal was strong out of the gates as 2016 began. It rose from about $14 to $20 by midyear, clocking a blistering 43% gain.

Will we see another gain of 40% or more by midyear? Of course, no one knows for sure, but the stars certainly seem to be lining up for a repeat performance.

That's why I'm going to share with you my 2017 silver price targets for the end of Q1 and later this year.

But late on Monday, the U.S. Dollar Index (DXY) gained as the market started to anticipate the near-term release of the latest FOMC minutes.

That drove Tuesday's action as the DXY rallied from 100.9 late Monday to 101.5 in the early morning. The dollar rally dragged the price of silver back down to $17.89 at the open. But even that was short-lived, as the DXY reversed course midday. Silver buyers took advantage of dollar weakness and bid the metal up to a peak of $18.03. The silver price ended the day at $17.93 for a modest 0.2% gain.

Unlike gold prices, silver prices were relatively muted on Wednesday despite strong movement in the dollar. The DXY rallied as the market expected word from the Fed minutes that rates were likely to be raised in March. 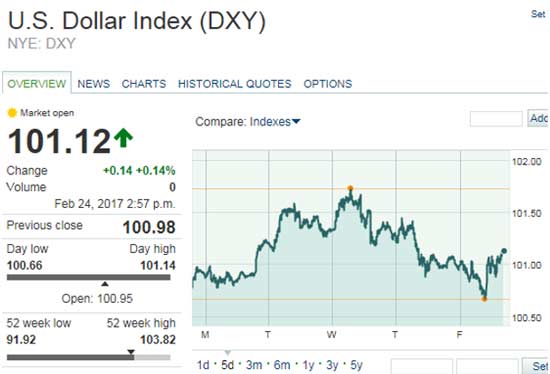 On Thursday, Feb. 23, the dollar endured a sharp sell-off from 101.4 to 101 by midday. Basically, the market digested the Fed's minutes and came away unconvinced about a March rate hike. As a result, silver prices opened at $18.02 but rapidly soared to peak at $18.06 before settling back and closing at $18.14. They climbed 0.7% on the day.

By Friday morning, the DXY dropped down to about 100.7. That – along with volatility in the Dow Jones Industrial Average – boosted the price of silver. It gained 0.2% to settle at $18.33. With that, silver scored a weekly gain of 1.3% from the previous Friday's close of $18.10.

But I see silver prices heading much higher this year thanks to a few bullish technical indicators. One of these indicators shows how silver is increasing in value compared to gold.

Here's our silver price prediction for 2017…

Our High Silver Price Targets for 2017