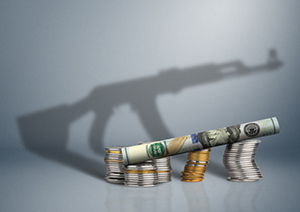 Friday, the Dow closed 7.47 points higher, just barely stretching its streak of record-high closes to 11 days. There are several factors that may cause some volatility in the markets today, though.

The first is President Trump releasing his first budget proposal today. It will have an increased military budget as promised, while taking funding from nondefense sectors like the EPA. There won't be any cuts to Social Security, Medicare, or other entitlement programs, though.

The second factor for market swings today is a number of U.S. economic data reports being released. Durable goods orders, pending home sales, and the Dallas Fed manufacturing index will all be released this morning.

Now that we know what will be moving markets, here are three top stocks to watch today...

Parker-Hannifin stock is down 1% in early morning trading after analysts adjusted its one-year price target.

Twenty-five analysts follow the company and released new consensus ratings. Twenty of the analysts rate Parker-Hannifin a "Buy," but the consensus one-year price target is $153.71.

The price target is below the current trading price of $155.04. The company is trading at an 11% gain year to date (YTD).

BioCryst stock is down 23% in early morning trading after posting its latest earnings report.

The company reported a net loss of $0.06 per share for Q4. The same quarter last year the company posted a loss of $0.25 per share.

The company announced that 70% of patients with high-output shock had a positive blood pressure response to its treatment, as opposed to 23% of the placebo patients.

Full results of the study will be published later this year.