Gold prices are lower on a normal profit-taking pullback after scoring a 3.5-month high on Monday. The world marketplace is focusing upon Tuesday evening's speech by U.S.

President Donald Trump to the U.S. Congress. He will provide U.S. lawmakers with his plans for growing the U.S. economy, as well as other domestic and foreign matters. There is a bit of uncertainty surrounding Trump's speech, as the U.S. president is known for being a "loose cannon."

U.S. Federal Reserve officials, including Chair Janet Yellen, are also scheduled to speak this week. Their comments will be closely scrutinized following last week's FOMC minutes that were deemed by many market watchers as a bit dovish on U.S. monetary policy.

The key "outside markets" on Tuesday morning find the U.S. dollar index trading lower. Meantime, Nymex crude oil futures prices are slightly lower today. Oil prices are still in a sideways and choppy trading range that has bound that market for several weeks. 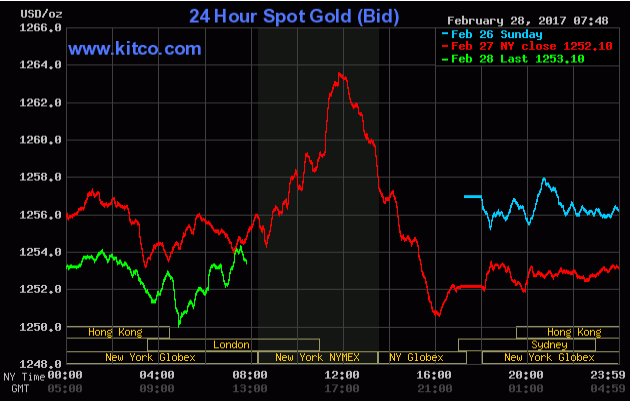