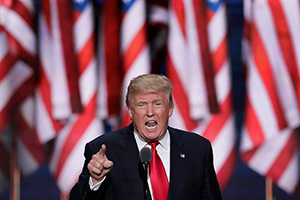 On Tuesday, the Dow Jones snapped its 12-day winning streak of record closing highs. A lackluster round of earnings results and weak economic data weighed on investor sentiment. The Commerce Department also announced Q4 GDP growth clocked in at just 1.9%.

The Dow Jones Industrial Average projected a 166-point gain in the wake of President Donald Trump's first speech before a joint session of Congress. During the one-hour talk, Trump called on Congress to work together to replace the Affordable Care Act, demanded $1 trillion in stimulus spending. and even proposed a new government agency that would serve American victims of crimes by immigrants. The key line of the night came on tax reform.

"My economic team is developing historic tax reform that will reduce the tax rate on our companies so they can compete and thrive anywhere and with anyone," Trump said. "At the same time, we will provide massive tax relief for the middle class," he said. "We must create a level playing field for American companies and workers."

Despite the large number of policy points covered by the president, the speech was still a bit light on details of his plans.

Trump's biggest critics are greatly opposed to his budget proposal. For example, the president's budget plan consists of a $54 billion increase in defense spending. To balance out the costs of such a massive increase, Trump has proposed slashing the State Department's annual budget by 37%. As we explain, that proposal has some senators saying that cuts at Foggy Bottom would put Americans' lives at risk. Here's our latest on this shocking development.

Investors were also speculating on the latest monetary policy statements by New York Federal Reserve President William Dudley, who argued that a March rate hike should be on the table. The statement came on the same day that San Francisco Fed President John Williams claimed there was "no need to delay" any interest rate hike in March. According to CME FedWatch, the probability of a rate hike in March currently sits at 35.4%.

Crude oil prices were ticking slightly lower as markets eye the weekly update on crude inventory levels from the Energy Information Administration later this afternoon. Traders were not convinced President Trump had made the case for higher U.S. production.

But the big news is that the Dow Jones is still hovering just below an all-time high.

And stocks have grown increasingly more expensive since President Donald Trump won the presidency on Nov. 8. So what are the most expensive stocks trading on U.S. markets today?

We put together a list the most expensive stocks trading today. While we don't recommend you avoid all of them, we do think investors should look for value and upside. That's why we put together another list of three stocks to buy for mega-profits in 2017.

You can read those, right here.