According to Money Morning Global Energy Strategist Dr. Kent Moors, as long as the OPEC agreement from November stays in place, the price floor above $50 a barrel will remain. And Moors expects WTI prices to top out at $62 a barrel because at that price oil producers will flood the market with supply.

And Moors' oil price predictions have a proven track record.

In August 2016, Moors predicted WTI oil prices would end the year between $52 and $54 a barrel. WTI prices ended the year at $52.79 a barrel. Now we're giving you his most recent forecast. 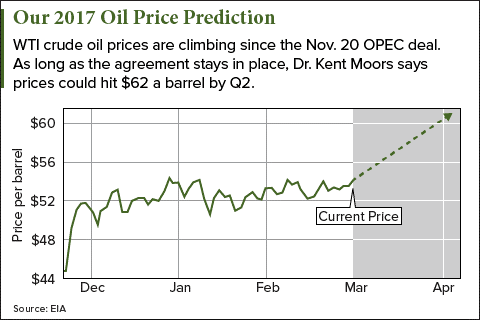 But while supply and demand will always be important for the price of oil, these five major geopolitical issues are catalysts in our oil price forecast that can shake up the price of oil in 2017. And oil futures traders will be keeping a close eye on these catalysts.

That's why we're not only giving you our top line oil price prediction, but our complete breakdown on what's moving oil prices this year.

These are the five geopolitical forces affecting oil prices this year…

The Federal Reserve Is Going to Hike Rates in 2017

The U.S. Federal Reserve is expected to hike interest rates three times in 2017.

And during the Fed's December meeting, FOMC members indicated three more rate hikes were likely to come in 2017. Currently, the CME FedWatch tool shows a probability of 68.6% for a rate hike in March.

The WTI crude oil price jumped 3% the day after the Fed announced its latest rate hike on Dec. 14.

Demand for Oil Is Surging Across the World

The World Bank expects demand for crude oil to rise by 1.3% in 2017. That will lead to an average demand of 96.3 million barrels a day.

The biggest increase in demand will come from the developing world. Growing populations and economic development in India and China will spur more demand for oil. The demand for oil from non-OECD countries will climb 2.3% in 2017.

But while demand is expected to grow in 2017, it's growing at a slower rate than in previous years.

The European Union Is on the Brink of Collapse

After "Brexit," when Britain voted to leave the EU in June 2016, nationalist movements in other EU countries have been emboldened.

While Prime Minister Theresa May will invoke Article 50 to leave the EU in March, other European countries are holding major elections this spring.

Dutch elections in March could end in victory for the anti-EU populist Geert Wilders.

Italy may also hold a parliamentary election this spring to replace Matteo Renzi, the former prime minister who resigned in December.

If Beppe Grillio – the leader of Italy's Five Star Movement – wins, he could call a referendum on Italy's membership in the EU.

But the biggest blow to the economic union will be a French exit.

The second round of French elections will end in May. Marine Le Pen, a leading "Eurosceptic," is expected to easily make it to the second round of voting in May. If Le Pen wins, she is likely to initiate a "Frexit."

The status of the EU impacts our oil price predictions because it leads to uncertainty and greater investment risk. Higher risk typically leads to more bearish investors.

WTI crude prices fell 6.4% the day after the Brexit vote. Frexit could be even bigger.