(Kitco News) –Tuesday evening's speech by U.S. President Donald Trump to the U.S. Congress was deemed to be optimistic and much more "presidential" than some of his campaign or press conference rhetoric, and that has worked to somewhat assuage the world marketplace and add to a "risk-on" mentality in markets Wednesday. World stock markets were mostly higher Wednesday. U.S. stock indexes are pointed toward higher openings when the New York day session begins. U.S. stock indexes are at or near record highs.

Gold prices are lower in part due to the risk-on trading day Wednesday, but also on some profit taking from recent good gains.

The more hawkish tone from those Fed officials on Tuesday have boosted the U.S. dollar, and have pushed up U.S. Treasury bond and note yields as well as government bond yields in Europe.

The key "outside markets" on Wednesday morning find the U.S. dollar index trading solidly higher. Trading in the USDX has turned choppy and sideways recently. Meantime, Nymex crude oil futures prices are slightly higher today. Oil prices are still in a sideways and choppy trading range that has bound that market for several weeks. 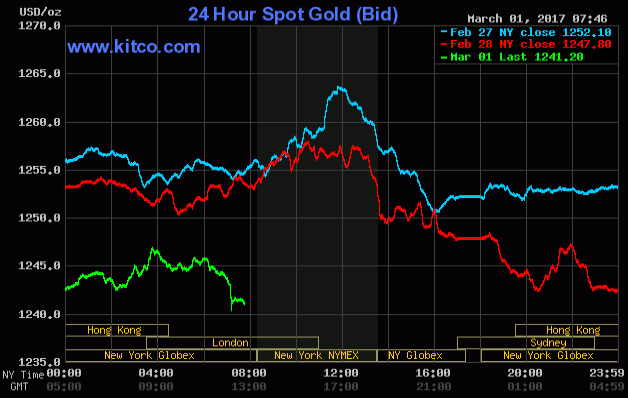 14542 Reads
These 3 High-Yield REITs Pay 8%, 10%, and 12% Dividends
REITs produce gobs of cash from rent and other fees generated from properties including office buildings, storage units, multifamily units, and more.