Last week, White House Press Secretary Sean Spicer indicated the government may "step up" efforts to enforce federal marijuana laws, in direct opposition to several states, such as Colorado and California, that have legalized cannabis for recreational use. And this week, Attorney General Jeff Sessions did anything but walk those comments back when he said "it remains a violation of federal law to distribute marijuana... whether a state legalizes it or not."

Spicer and Sessions' ominous statements galvanized cannabis industry players, insiders, and activists, even as they sent marijuana stocks into a "Trump slump" of their own.

Now, I've recommended my Nova-X Report readers who've been playing the stocks in our weed investors' "bible," The Roadmap to Marijuana Millions, treat this downturn as a chance to use my "Cowboy Split" strategy to add to positions that have already paid triple-digit gains.

But I completely understand why regular investors playing this lucrative trend might be nervous.

So let me tell you why I'm not nervous at all. It has to do with a powerful, unlikely "Red-Blue" coalition that isn't going to take any renewed assault on legal pot lying down.

But more than that, it has to do with unstoppable momentum... 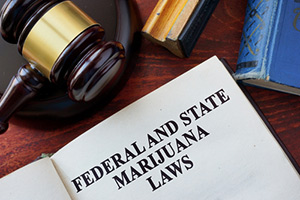 Playing on the strength of marijuana initiatives at the ballot box on Election Day, the bipartisan quartet in the House of Representatives decided not to wait out demographic changes, slowly fading opposition from older lawmakers, or any potential problem initiatives that could arise from the Trump administration.

The caucus - the first of its kind - aims to protect state-level gains made in recent years and bolster support for reform of antiquated federal laws. Their endgame: removing marijuana from the Drug Enforcement Administration's (DEA) list of Schedule I drugs, which also includes cocaine and heroin.

The newly organized effort to fight off holdout marijuana opponents at the federal level is positive news for the entire industry - including the Nova-X Report's "ecosystem" of 30 stocks.

The Cannabis Caucus Is Leaving Nothing to Chance

The Congressional Cannabis Caucus made a splash on the issue a week before the administration could, thus shaping the issue. Importantly, Republicans are helping spearhead the caucus. With a majority in the House and Senate, support from GOP lawmakers is essential to any pro-cannabis congressional effort.

Sessions, a former Republican senator, has long been an outspoken critic of marijuana, and his statements during confirmation hearings and since have been vague at best on the topic. But Trump ran on a heavily pro-business platform. As such, he'd have a hard time ignoring the massive amount of (taxable) money legal marijuana companies are making.

Yet the first official statement on marijuana legalization post-inauguration was a mixed bag - highly supportive of medical marijuana, not so with recreational.

Since Presidents address the othe night all of my Weed stocks your 30 plus some more have all dropped including today'
I am hoping this is the bottom and market will turnaround weed stocks rise up a lot? What type of time frame do you think it will take to turns around?

With the opioid addiction killing more people than anytime in history legal, yet someone with a certain disease can go to jail for the use of weed that hasn't killed not one human being and it really helps with pain or many other reasons other than pain. Why in the heck is weed so high on the drug list. It really does make a difference in a person's livelihood without finding people dead with prescription drugs in their Pockets. I do not understand the war we AMERICANS are facing with the legalization of weed that really helps human beings in so many ways other than prescription drugs. I would rather pass someone driving after doing weed than prescription drugs or alcohol. If people that are dead set against weed had the health problems I have I would bet everything I have that you people in the federal government would pick weed over this crap I have to take everyday just to get my day started this whole deal with me d's is bull! maybe someday people who are against it will get their head out of their butt and realize that weed isn't nearly as dangerous as these prescriptions we are given that is really killing us slowly But for sure killing our insides just for starters liver, kidneys and many other internal organs. Thanks a lot to you people who really don't understand what real daily pain feels like. I wouldn't wish what is wrong with me on anyone maybe before more people keep dying from taking medication even the way you are supposed to take just maybe someone will finally get their head out out of their butt. Come on, you people can do something about this and still make your cut of the money also. I know my words will not change a thing but if you guys in the big house felt as I do every day you would agree with me. Do I have to sell my house and move also. THANKS ALOT!!!!!!

I read today on commoncause.org that Belita Nelson, the media spokeswomen for the DEA from 1998 to 2004, was told when she first got her job that: marijuana was safe. Her education coordinator Paul Villaescusa stated "Marijuana is safe. We know it's safe. But it's our CASH COW so we can never give up the fight against it." She did her job spreading the lies about marijuana at events and on TV for several years until she had a friend that got cancer. He was a Dallas Cowboy and she ended up growing it herself to help her friend. Then in 2004 she resigned after investigating the heroin epidemic in Plano, TX and finding that the addicts who turned to cannabis had a much higher success rate getting off opiates.

i'm from biafra i love america

how i wish america will be great again

Mr Trump claims that he loves the democratic system if that were so he would also respect the individual states that voted to legalize recreational use of marijuana also if he is so concerned with the safety of the American public let him outlaw liquor as history shows it has destroyed more lives ,families , and the health of his fellow US citizens then pot will ever do.