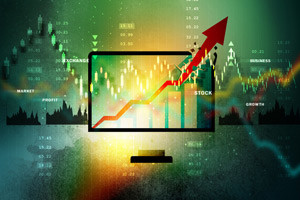 The stock market news today features the Dow on the rise again. Markets continue to push higher a day after a record-breaking trading session saw the Dow top 21,000 for the first time in its history.

On Wednesday, the Dow Jones hit a new record high after surging more than 300 points. The markets soared a day after President Donald Trump gave a speech calling for tax reform, the repeal and replacement of Obamacare, and cooperation among members of Congress.

The Dow Jones Industrial Average was projected to open up 27 points in pre-market hours a day after it shattered the 21,000 barrier and had its highest volume trading day of the year. Investors are preparing for another busy day of economic data, including a report on weekly jobless claims and a speech from Federal Reserve Bank of Cleveland President Loretta Mester. This morning, the U.S. Labor Department announced U.S. weekly jobless claims reached 223,000 last week. That's lower than economists had forecast.

The moment the Dow hit 21,000 Wednesday, Money Morning Capital Wave Strategist Shah Gilani and Chief Investment Strategist Keith Fitz-Gerald were on the set of FOX Business Network's "Varney & Co." Fitz-Gerald and Gilani had both predicted the Dow would exceed 21,000 in the early part of 2017, so check out what happens next...

Crude oil prices were sliding after the Energy Information Administration (EIA) announced U.S. crude inventories hit a record high last week. Yesterday, the energy agency announced the nation saw an uptick in crude stocks by 1.5 million barrels. Even though that figure fell short of analysts' expectations, the United States has now seen its inventories swell to more than 520 million barrels.

The record inventory levels offset any optimism from a report that Russia's production levels have flattened. Russia has not sought to boost output and has remained in line with its commitment to curb excessive production alongside members of OPEC.

Money Morning Global Energy Strategist Dr. Kent Moors has just released his latest crude oil price forecast for 2017. Dr. Moors projects that WTI crude oil prices will climb to $62 a barrel and Brent crude will rise up to $65 a barrel by April 2017. But investors shouldn't just purchase oil ETFs or crude futures if they want to make money. This morning, Moors offers unique insight on how to make money on rising crude prices that you won't find anywhere else. Click here.

But the big news is the Snapchat IPO...

This morning, Snap Inc. (NYSE: SNAP), the parent company of the social media giant, will begin trading publicly on the New York Stock Exchange. The debut comes a day after the company announced it had successfully sold 200 million shares at $17.00 per share.

Snapchat is debuting in a red-hot stock market. But should you jump into this feeding frenzy when it kicks off today?

The short answer is "buyer beware."

Trending Now: Check Out the Top 10 IPOs to Watch This Year

This IPO is immensely rigged against retail investors. The social media company's user growth metrics are stagnating. And the company has already said that it may never run a profit.

But there is a way that you can make money during the Snapchat IPO without buying the stock. In fact, this company will make more money off Snapchat in the years to come than the social media company itself. Check it out, right here.