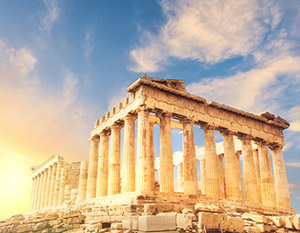 The debt crisis in Greece has been going on for nearly a decade, and now Greece is on the verge of its fourth bailout in seven years.

Here's a complete breakdown and timeline of the debt crisis in Greece...

Greece was hit especially hard during the global economic recession of 2007 and 2008. Before the crisis, country officials had been understating the deficit for years. Greece was burning through cash faster than anyone knew.

When the recession hit, Greece couldn't keep hiding its deficit problem because it could no longer pay its bills.

Once Greece announced it was understating its deficit and announced the true deficit in October 2009, the country was unable to borrow money on the open market. The announcement called into question the financial stability of Greece.

2010: Austerity Packages and a Bailout for Greece

When Greece was shut out of the markets in October 2009, it careened towards bankruptcy. By spring of 2010, Greece needed to be bailed out.

In anticipation of the formal request for a bailout of Greece, the EU, the IMF, and Greece agreed to bailout measures.

Within nine days of the formal request, Greece received aid and announced the third austerity package. This package was approved three days later despite nationwide protests and riots.

The shrinking economy (and tax base) and rising unemployment lead to another bailout and intensified the debt crisis in Greece.

On top of a shrinking economy, Greece was required to pass more austerity measures. The measures passed in 2012 increased the retirement age, reduced pension amounts, and cut pay for civil servants.

The reform bill passed in April eliminated 15,000 state jobs by the end of 2014. The bill made it easier to fire civil servants, increased working hours for teachers, and reduced property taxes.

Greece is finally able to bring in more than it spends (separate from debt payments) and continues to pass reforms needed to receive bailout funds.

2015: Default and a Third Bailout for Greece

In June 2015, Greece becomes the first developed country to default on a loan to the IMF. The default leads to a third bailout and more austerity measures.

Despite what looks like improvement, Greece is still in debt far beyond what it could hope to pay back without an improved economic outlook.

2017: A Fourth Bailout for Greece Is Possible

In July, Greece is due for a repayment of €7.4 billion ($7.81 billion), which it can't afford. Germany, the dominate player in the EU, and the IMF are at opposite sides of the issue for another Greece bailout.

Germany is demanding further austerity measures, while the IMF is calling for better economic policies and a reduction in Greek debt.

This divide among Greece's lenders will further complicate bailout talks leading up to the July due date.

This play could help you combat the upcoming market volatility: A completely unique gold play is forming in the markets. And it's so rare that it's only the third time in 20 years that it's happened. If you get in now, you could see a share of upwards of $13 billion in cash windfalls. Read more.