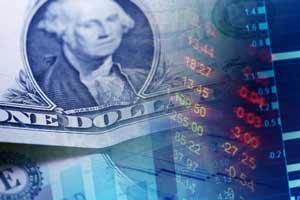 In Dow Jones news today, the index was sliding again in pre-market hours as investors eye a speech on the timing of the next interest rate hike by U.S. Federal Reserve chair Janet Yellen. A stronger dollar has banking stocks, gold prices, and Bitcoin prices in focus for Friday.

On Thursday, the Dow slumped more than triple digits after expectations for an interest rate hike surged and a major investigation into one of the nation's top manufacturing firms rattled investor sentiment. The big news of the day was the public debut of Snap Inc. (NYSE: SNAP), which rallied 44% and had people asking how to purchase Snapchat stock.

The Dow Jones Industrial Average projected a 50-point decline as investors heighten their expectations for an interest rate hike later this month. The dollar continues to rise, which means investors should pay attention to banking stocks during the trading session.

Investors are keeping a sharp eye on statements by two key officials at the Federal Reserve. This week alone, the implied probability of a rate hike has spiked from 30% on Monday to 77.5% on Thursday thanks to various statements suggesting that a rate hike should be considered. Fed Chair Janet Yellen and Vice Chair Stanley Fischer will speak this afternoon. Markets anticipate that both officials will make their own cases of a rate hike when the Fed Open Market Committee meets on March 15.

On Thursday, the price for one bitcoin surpassed the price of an ounce of gold.

It was the first time in the digital currency's history that it surpassed that milestone. Bullish investors said that Bitcoin's parity with the yellow metal ensues its future as an investable commodity and continue to refer to it as "digital gold."

Investors in Caterpillar Inc. (NYSE: CAT) are still looking for answers a day after federal authorities raided three of the company's Illinois offices. After the news broke Thursday afternoon, shares fell more than 4%. It remains unclear why federal agents raided the offices. However, in a press release, company officials hypothesized that the actions were related to an Internal Revenue Service investigation into profits tied to a Switzerland-based subsidiary.

But the big news is the threat of federal enforcement on legalized marijuana across various states.

Last week, White House Press Secretary Sean Spicer hinted that federal officials may "step up" efforts to enforce federal marijuana laws. That would happen in places like Colorado and California, where voters have legalized cannabis for recreational use.

With marijuana stocks surging in recent months, many investors are worried the U.S. government could kneecap the entire industry. But despite these concerns, Money Morning Defense and Technology Specialist Michael A. Robinson says that enforcement isn't going to hurt the triple-digit profits this industry has seen thus far. In fact, he has an easy strategy for you to make money thanks to this story's unstoppable momentum. Check it out, right here.