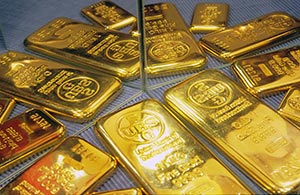 Is the price of gold going up in 2017? So far, the answer is yes - and we think prices will rally even higher in the months ahead.

Since the beginning of the year, gold prices have climbed 7.1% to their current per ounce price of $1,233.70. That beats the Dow Jones Industrial Average's gain of 6.5% over the same period.

However, the stock market consistently hitting new all-time highs has investors growing more bearish on gold prices in 2017. According to Commitments of Traders reports, the number of short bets on gold futures climbed 36.7% from 455,619 on Jan. 24 to 622,668 on Feb. 21. That increase indicates traders are becoming less confident that the gold price will rise this year.

Here's the one reason why he's so confident in that prediction...

Is the Price of Gold Going Up This Year? Yes - for One Big Reason

The biggest reason why gold prices are going up in 2017 is rising inflation. This will keep climbing thanks to the surging stock market and increasing bond yields.

The inflation rate measures how much the prices of goods and services across the whole economy are rising. Since a soaring Dow Jones Industrial Average comes from soaring stock prices, inflation fundamentally arises from a market rally.

But the bad thing is that explosive market growth reduces the U.S. dollar's purchasing power. That results in lower spending, which generally hurts the economy.

The U.S. Federal Reserve keeps inflation in check by managing interest rates. If inflation is rising, the Fed will raise rates, which it did last December. But that rate hike did not keep the Dow Jones from hitting 21,000 for the first time ever on March 1 on the back of Trump's proposed tax cuts.

The stock market's unprecedented rally has also pushed bond yields higher. The Dow Jones' 0.9% gain over the last week alone has sent the 10-year Treasury yield up from 2.31% to 2.5%. High bond yields often indicate high inflation, and the latest January data shows inflation at 2.5%. That marks the sixth straight monthly increase and is also the highest rate since March 2012.

Since demand for safe havens like gold rise when the dollar is volatile, gold prices will rise as people protect themselves. This will coincide with a similar spike in demand for gold stocks.

The best gold stocks to buy right now are gold miners. These companies will benefit the most from rising gold prices because that will incentivize them to boost output, resulting in bigger profits.