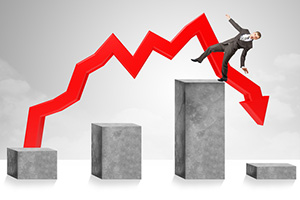 In Dow Jones news today, the Dow fell 51 points after a wild session of interest rate speculation, geopolitical tensions, and concerns about the stability of OPEC's agreement to cap excess crude production.

In addition, markets reacted to a lackluster growth target for the Chinese economy.

Geopolitics dominated a crazy day of news around the world. First, markets were reacting to the test of four ballistic missile launches by North Korea over the weekend. According to Japanese Prime Minister Shinzo Abe, three of the missiles landed in his nation's economic zones, prompting concerns about the rogue nuclear power's growing hostility and its potential instability.

Meanwhile, the entire media was trying to make sense of an accusation by President Donald Trump over the weekend that he had been wiretapped by former President Barack Obama during the 2016 campaign.

Meanwhile, markets were also weighing the timing of the next interest rate hike by the U.S. Federal Reserve. With the Fed set for its next meeting March 14-15, investors are still parsing through comments by Fed Chair Janet Yellen. It seems the only potential roadblock to a rate hike next week would be a weak February jobs report.

If the Fed does raise rates in March, here's how it will affect your money.

Crude oil prices were falling on concerns Russia will not be able to maintain its compliance efforts with a global deal to cap excessive crude production. In addition, China's weak GDP growth target added pressure on oil prices.

Russia, which is not a member of OPEC, is working alongside the world's largest crude cartel to reduce output and support prices. However, February data indicates that Russia's daily crude output was unchanged compared to January levels. Markets are also increasingly concerned about the possibility that OPEC will not extend its deal to reduce crude output and help bolster crude prices.

But the big story is the Snap Inc. (NYSE: SNAP) stock price. The company has erased all of its post-IPO gains and fallen back beneath $24.00, the price that it opened at last Thursday.

SNAP stock fell more than 12% after an advocacy group representing large institutional investors approached several stock market index providers. The advocacy group asked to bar companies that fail to provide voting rights to shareholders on the open market from their stock benchmarks. The news comes a few days after the company went public and announced that owners of Class A shares would not have any voice in the company. So, should you invest in the company after the Snapchat IPO? We break down how you can still make money on this IPO without ever having to buy Snapchat stock.

Up Next: Anti-Brexit Tony Blair Urges Brits to "Rise Up" and Stay in EU