After a relentless rise for the silver price in 2017, we’re finally seeing the metal start to correct.

This kind of winning streak can’t continue unabated, and we’re currently seeing a second, stronger correction for the price of silver.

Rising inflation expectations, and data confirming those expectations, have underpinned the silver price rally. Trump’s recent speech to Congress, which boosted stocks and the U.S. dollar, have also been bearish for silver prices.

Urgent: Buy These Stocks for Huge Profits in 2017

Now, the markets are pricing in a March rate hike by the Fed. That’s also caused the dollar to rally and the silver price to fall.

But the Trump stock market rally and surging dollar won’t affect the long-term silver price in 2017. That’s why I’m going to share with you my bullish 2017 silver price forecast.

Why the Price of Silver Saw a Huge Correction Last Week

Tuesday was a near exact repeat of Monday, except silver opened lower at $18.27. Buyers took over and quickly ran it up to $18.41 by late morning, then sellers got the upper hand and dragged the price of silver 0.7% lower to close at $18.29.

The action in silver and the dollar on Wednesday was dominated by Trump’s speech to Congress the night before. The speech lit a fire under the dollar and caused the Dow Jones Industrial Average to surpass 21,000 for the first time ever. While that certainly diverted investor interest away from silver and into stocks, the silver price still managed to post a daily gain. It settled 0.5% higher at $18.39.

Editor’s Note: An incredibly rare gold anomaly is shaping up in the markets as we speak — one that has occurred ONLY twice in the past 20 years. And it’s about to happen again. Details here…

On Thursday, March 2, silver prices had their biggest one-day drop of the year. They opened at a healthy $18.30 but eventually caved to selling pressure as the dollar surged above 102. 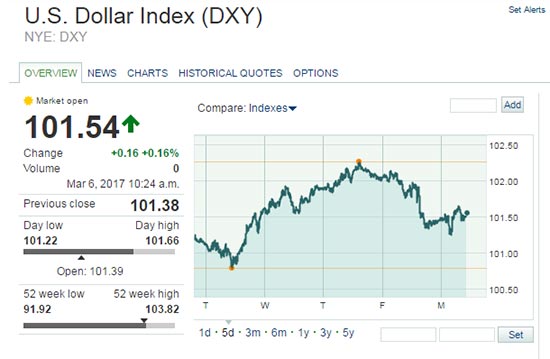 Here’s our silver price forecast for 2017…

Silver Price in 2017 Will Hit These Bullish Price Targets