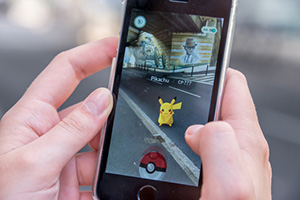 And forward-looking investors who are familiar with augmented reality stocks now can cash in on this 12,181% increase in market value.

While similar, augmented reality technology has some major differences from virtual reality. And because of the differences, companies are more easily implementing AR technology into their business strategies right now.

The Difference Between Augmented Reality and Virtual Reality

Through VR technology, you enter a "virtual world." Users wear VR headsets and are isolated from reality.

Right now, most VR technology is used for video games.

With AR technology, VR and the real world are blended together to allow users to interact with their surroundings.

One of the best-known examples is Pokemon Go. In the game, Pokemon Go players use the cameras on their phones to search for Pokemon. The creatures will pop up on the phone screen in real time.

For instance, if you're taking a hike in the woods, a Pokemon could pop up on the trail you are walking on.

But there's more to augmented reality than just games…

For example, The Coca-Cola Co. (NYSE: KO) used AR technology for a marketing campaign in December 2014. When users downloaded a mobile app from Coca-Cola on their phone and scanned a code, Santa would appear in front of them on their screens.

When shoppers scanned certain Coke bottles in stores, the Coke bottle would be surrounded by snow.

Originally, sales representatives would need to use photographs to sell fridges, stands, and vending machines.

But with Cimagine Media, Coke can show prospective customers through AR technology where vending machines and other products can be placed in a store. When using the technology, sales representatives had a 92% success rate of making a sale, according to Cimagine's website.

For the AR and VR market, investors already know three of the top tech companies working on the emerging technology:

That's why today, we wanted to provide Money Morning readers with a list of AR companies that aren't publicly traded yet.

Keep in mind, these companies are speculative investments if they ever go public. Since this is still a new technology that isn't yet widely used by the general public, shares of small AR stocks could be extremely volatile.

But knowing the private companies and the advancements they are making is important for tech investors.

Augmented Reality Companies to Watch in 2017