Big Oil companies like Exxon Mobil, BP, and Chevron may be some of the most recognizable oil company stocks you can buy, but they're actually some of the worst oil investments you can make right now.

Unlike more nimble American oil companies that are raking in huge profits in 2017, Big Oil stocks are all down on the year. 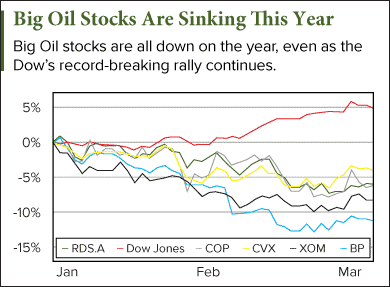 And rising oil prices won't be enough to help these oil stocks...

Oil prices have surged nearly 20% since OPEC announced its agreement to cut production on Nov. 30. But even with oil prices above $50 a barrel, Big Oil companies like BP Plc. (NYSE ADR: BP) are still struggling.

Last month (Feb. 7), BP told investors it won't be able to make a profit unless oil prices rise above $60 a barrel.

That's why we are going to show you exactly which oil stocks to buy instead of these oil giants, so you can profit from higher oil prices.

Wall Street analysts predict revenue for our first stock pick could balloon 35% this year alone. And they're predicting that will translate to double-digit gains in share price, too.

On top of that, this stock is paying a 6.82% dividend yield.

Before we get to our picks, here's where the real money in oil is being made...

American Shale Oil Is Back and So Are the Profits

Moors says American shale oil is where oil profits are being made now, but the oil supermajors are too late to the action.

Shale oil is so important because it's the leading source of American oil. Rystad Energy reports the United States has the largest oil reserves in the world. And over half of the U.S. reserves are in shale oil.

However, shale oil isn't easy to get out of the ground.

Shale oil is embedded in rock formations instead of underground wells. That means it isn't cheap to produce. And oil companies drilling for shale oil can't make a profit unless the price of oil is high enough. That price can be anywhere from $40 to $60 a barrel.

In September 2016, OPEC agreed in principal to an oil production cut in an effort to boost oil prices. On Nov. 30, OPEC and 11 other countries signed a deal to cut oil production by 1.8 million barrels a day.

And now that oil prices are above $50 a barrel, shale oil has come roaring back.

The Baker Hughes rig count shows the United States added 135 oil rigs since the end of November, bringing the oil rig count up to 608 at the beginning of March. That's a 28% increase.

And the EIA's latest forecast predicts shale oil production will rise by 80,000 barrels this month, double its February projection.

Those forecasts have caused Big Oil companies to play catch-up.

In January 2017, Exxon Mobil Corp. (NYSE: XOM) bought $6.6 billion worth of shale oil acreage in the Texas Permian Basin, one of the top shale oil-producing regions in the world. And Chevron just unloaded $5 billion of assets in Asia last year as it plans to double its spending in the Permian Basin by 2020.

But Big Oil is too late.

There are already smaller American oil companies established in the shale boom. And their profits are tied directly to shale oil production instead of the refining business or massive projects all over the world, which are burdens for the oil supermajors.

And those smaller American companies are where the best profit opportunities lie...

We're giving you our top plays to help you profit from the rebirth of American shale oil. Unlike the Big Oil company stocks that are sinking into the red this year, these oil stocks are on the rise.

These Top Oil Stocks Will Blow Big Oil Away