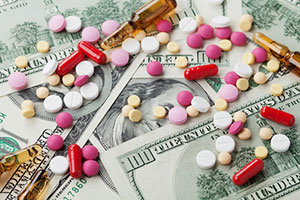 Despite the two-day losing streak, the CBOE Volatility Index finished only slightly up on the day.

The Dow Jones dropped 29 points Tuesday. Once again, President Trump's Twitter Inc. (NYSE: TWTR) feed was the catalyst of yet another downturn. This time, the POTUS hammered drug companies over high prices. President Trump said he is looking for new ways to boost competition and reduce the cost of medications.

The series of tweets came on the same day that drug companies were already under pressure after congressional Republicans released a plan to replace the Affordable Care Act. Despite uncertainty over what the replacement would do to the healthcare industry, shares of the nation's largest health insurance companies went largely unchanged. Shares of Humana Inc. (NYSE: HUM) climbed over 2%.

Banking stocks were also sliding as investors are taking profits off the table. Shares of JPMorgan Chase & Co. (NYSE: JPM) and Wells Fargo & Co. (NYSE: WFC) were both off as investors speculate on the timing of the next interest rate hike.

With the U.S. Federal Reserve set for its next meeting March 14-15, Chair Janet Yellen said the only potential roadblock to a rate hike this month would be a weak February jobs report. The U.S. Labor Department will release the official unemployment report Friday. CME's FedWatch tool has set an 84.1% probability of a rate hike in March.

Crude oil prices were down as investors continue to weigh Saudi Arabia's statements on the OPEC agreement to curb excessive crude production. During an energy conference in Houston, Saudi Oil Minister Khalid Al-Falih said OPEC's agreement has helped balance supply and demand. However, it appears Saudi Arabia believes that OPEC only has reached its lofty compliance targets due to its willingness to cut production below 10 million barrels per day (bpd). Traders are looking for clues into the stability of the agreement as OPEC plans to meet again in May.

Meanwhile, the Bitcoin price is falling.

The commodity slumped almost $100 after an official at the People's Bank of China (PBOC) suggested the central bank should consider blacklisting Bitcoin exchanges that violate national rules.

But the big story is Microsoft Corp. (Nasdaq: MSFT).

Shares were slightly up today on news of a devastating outage to the company's servers. Reports around the globe said there were outages for users of Skype, Hotmail, Outlook, and Microsoft Office 365. The firm reported it had been working on a solution to address the issue throughout the day.