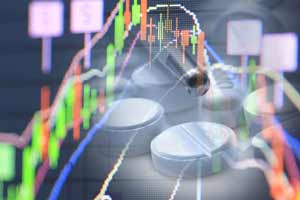 Today's stock market news focuses on a pre-market slide in the Dow as traders are jittery about President Trump's ability to implement his economic policies and they begin to parse through Republicans' new plan to replace the Affordable Care Act.

On Monday, the Dow fell 51 points after a wild session of interest rate speculation, geopolitical tensions, and concerns about the stability of OPEC's agreement to cap excess crude production.

The Dow Jones Industrial Average projected a 25-point decline as investors continue to worry about the timing of President Trump's ability to get his economic policies passed through Congress.

Although Republicans have unveiled a new plan to replace the Affordable Care Act, Democrats immediately criticized the plan. In addition, markets are still very concerned that Trump has failed to offer details on his tax reform plan and has instead focused on accusing his predecessor Barack Obama of spying on him during the 2016 campaign.

The uptick in political turmoil has some concerned that the "Trump rally" could face some additional pressure in the weeks ahead. Money Morning Chief Investment Strategist Keith Fitz-Gerald appeared on FOX Business Network's "Varney & Co." yesterday to share his insight on the Trump rally, the Snapchat IPO, and more. Watch the interview, right here.

The markets also anticipate the U.S. Federal Reserve plans to raise interest rates in March 2017. The recent uptick in rate hike expectations comes a few days after Fed Chair Janet Yellen hinted that the next rate hike was probable should we continue to see positive economic data. Last week, inflation levels rose close to the central bank's target rate of 2%. This figure places greater emphasis on Friday's release of the February jobs reports and official unemployment rate. Here's more on the timing of the Fed's next interest rate hike.

Crude oil prices were sliding on forecasts that U.S. shale production is set to rise in 2017. The International Energy Agency released a report stating that such production will increase by roughly 1.2 million barrels per day (bpd) by 2022. The global agency explored a range of long-term price increases and the resulting increase that would follow. According to the IEA, an increase of crude prices to $80.00 per barrel would lead to a daily increase of roughly 3 million barrels per day. The WTI crude oil price today dipped 0.1%. Brent crude slid 0.1%.

The social media company is under pressure after the stock fell more than 12.2% during Monday's trading session. Shares fell to their lowest level since last week's IPO after a major advocacy group representing institutional investors approached several stock market index providers. The advocacy group asked to bar companies that fail to provide voting rights to shareholders on the open market from their stock benchmarks.

In pre-market hours, shares of SNAP are off more than 3.2%.