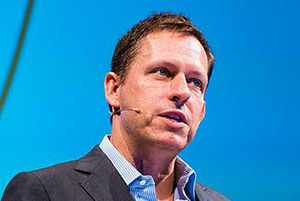 Peter Thiel, Silicon Valley billionaire and close confidant to President Trump, believes the era of globalization is as good as gone.

Indeed, globalization - when businesses operate on an international scale - has been under attack in recent years.

And protectionism (the exact opposite of globalization, when domestic companies are discouraged from doing business globally) was the core component of Trump's campaign that led him to victory.

"The election of President Donald Trump showed just how unhappy people are with globalization," said Thiel.

No one in their right mind would start an organization with the word "global" in its title today, he added. "That's so 2005, it feels so dated."

Trump has made his disdain for globalization clear; it was one of his major talking points on the campaign trail. "America changed its policy from promoting development in America to promoting development in other nations. That's what's happening and that's what's happened," said Trump during his trade speech on June 28, 2016. "It is the consequence of a leadership that worships globalism over Americanism. We cannot continue to do that."

Indeed, Trump's victory left American companies walking a fine line. They must defend their global business practices that have been central to growth, but also position themselves as a "proud American company" in order to please the POTUS and his supporters, Forbes reported on Feb. 27.

Even multibillion-dollar software giants like General Electric Co. (NYSE: GE) have acknowledged the trend. "There is deep skepticism toward the ideas that powered economic expansion for a generation, with concepts like innovation, productivity, and globalization being challenged and protectionism on the rise," said GE Chief Executive Officer Jeffrey Immelt in his annual February shareholder letter.

Still, the 124-year-old industrial conglomerate made a case for the company's pro-globalization outlook. "We still see substantial opportunity to grow around the world by investing, operating, and building relationships in the countries where we do business," he added.

Patalon is one of the best sources you can get on the profit potential of GE. He's got the "inside scoop," after all...

He sees GE positioning itself as a dominant leader in a necessary industry, one that has years of growth ahead -- even if Thiel's prediction is true.

As an investor, you can't afford to miss this. Check out the video below - where Patalon shares his unique story about GE, the amazing profit potential he sees in GE's new tech developments, and how you can maximize your return on GE stock now.

Editor's Note: Bill Patalon's got even more winners to share. One of his specialties is uncovering tiny, little-known stocks - often trading below $10 - and recommending them for peak gains as high as 663%... 628%... and 818%. He'll show you exactly how to use this method for yourself for a shot at exceptionally large returns on straight-up stocks - anyone can do it. Click here to see how it works.