Cuban posted his healthcare ideas on Wednesday via his website, Blog Maverick, two days after members of the House GOP released their official proposal to replace the Affordable Care Act (ACA). 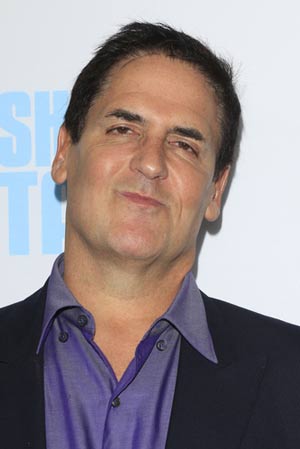 The House Republicans' plan has since been endorsed by President Donald Trump but rejected by a conservative niche group of congressional members – the "House Freedom Caucus" – who believe the latest proposed strategy to replace the ACA is tantamount to "Obamacare Lite" or "Obamacare 2.0."

Cuban also proposed using "free market insurance" plans for all other healthcare issues, where patients and healthcare providers would set the prices for medical goods and services themselves (with Uncle Sam's intervention) according to the laws of "supply and demand."

Here's what the "Shark Tank" star wrote on Blog Maverick:

Whether it's Medicaid or a new program, every single person in this country should be covered 100% for chronic physical or mental illness and for any life-threatening injury.

There would be no mandates. There would be no individual penalties.  No tax credits. No subsidies. No offsets or deductions for buying higher end insurance. This will be single payer (yes, I know it's a dirty phrase in this country) for chronic physical or mental illness and for any life threatening injury.

Everything not covered by the above can be covered by insurance sold on the free market, managed by the states, sold across state lines, without government interference.

After posting these healthcare ideas, Cuban then took to Twitter, asking readers to "shoot holes" in them.

His reason for inviting mass criticism was a simple one: "I'm not a healthcare policy expert," he wrote. 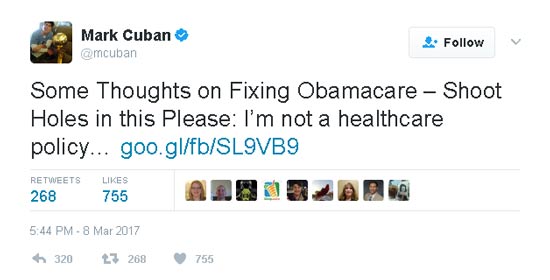 It should be noted, however, that Cuban may be entering the Obamacare debate for a very specific reason: During a Sloan Sports Analytics Conference panel discussion on March 4, Five Thirty Eight's Nate Silver asked Cuban if he was considering running for president in 2020 against Donald Trump.

Cuban's answer: "I'll get back to you on that." 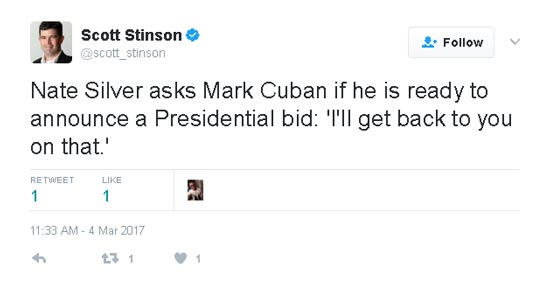 Only issue here is the middle class and small bussiness already pay all the taxes,no tax raise . Go to a flat tax 10% ,sales tax ,and problem solved .all same insurance gov paid we pay for it anyway,i could name -a lot of issues here ,one being same for all poleticians and public.

Good idea, I believe this would save cost. Coverage should be what Tricare for life offers to their patients.

Mark Cuban is a self serving Blow Hard. Ignore him. Another rich mouth piece.

The way to lower costs is to NEED LESS CARE!!! That would require a paradigm shift in our concept of "Health Care". Put down the Krispy Kreme, HFCS sweetened beverage, eat your veggies, and WALK someplace. Read THE CASE AGAINST SUGAR by Gary Taubes and follow the facts where they lead. If half of us did half of that, the total cost of medical care would decrease. There is a difference between health care and illness care – so be less sick and need less illness care. We cannot afford to pay for care for self inflicted disease with public money!

hi Mark: Socialism. Single Payer is a socialistic program.
The Feds control everything and they have your Meds in DC. No way. We want a full Repeal and Replaced program period.

Brenda: What would "replaced" look like. We currently try to pay for care with Insurance policies. If the amount of care doesn't change, the amount of money it costs won't change either. We currently allow Insurance companies to siphon off the top 20% in advertising, administrative, and dividend costs so right off the bat we lose 20 cents of every dollar. If we "replace" the ACA with another "insurance" program we wast the same 20 cents. Then what. More insurance run by companies that must make a profit to stay in business and then…? You all see where this is going – and that dog will never catch his tail.

The Single Payer approach would improve outcomes 100% at half the cost (other countries have experienced this). Why do you care whether you pay an insurance company a premium of $1000 a month or a tax of $500 a month to a government single payer? What matters is what goes out of your wallet. If Govt can do it for less, so be it.

What we have now is wasteful – too many middle-men siphoning off 20 or more cents for every dollar. Medical establishments spend up to 30% of their efforts to code different systems from different insurance companies duplicating the administration, negotiate on behalf of patients, and so on. Most frustrating! I could go on… Why should we all pay twice as much and get half the results just to satisfy some ideology?

Also, we seem to be fixated on the 'insurance' aspect rather than the 'care' aspect of health. We need 'healthcare' more than we need 'health insurance'.

And don't even get me started on the Pharmacy Benefit Managers (PBMs) – another layer of value-subtracting middlemen!

All the best, Cuban!

Mark,
A single payer system would eventually become a huge Tax for the working man. In UK they are taxed at 65% and the quality of care will go down. I've been helping Individuals,seniors and small business find benfits for almost 30yrs. Here is my plan. copy and paste
https://biteable.com/watch/presentation-2-1332197/dadd935f123822e7324659e623d9059a1f662b69