The gold price in 2017 has taken a dramatic fall recently.

Since the beginning of March, gold prices are down 4.3% to $1,200. In fact, the metal has declined every single day this month for eight consecutive sessions.

But frankly, it should not come as a surprise. At least, not if you've been following me in this space.

After all, I've been talking about how the gold price had likely moved into overbought territory and that it was ripe for a correction.

Rare gold anomaly - an event so rare, it's only happened twice in 20 years! The first time it created $1.25 billion in new wealth virtually overnight. The second time, it created a cash windfall of $6 billion. And it's about to happen again. Find out more.

And the combination of a pending interest rate hike and a rallying dollar have teamed up to send the price of gold into this sell-off.

By now, you know the Fed is all but certain to raise rates next week. Actually, I've been impressed with gold's resilience in the face of the expected rate hike and stronger dollar.

My sense is, given the depth of this sell-off, we've likely seen the worst. There could be a little downside left, but I don't think much.

Once the Fed confirms its rate hike, I think gold will return to rally mode. I've adjusted my gold price targets to reflect the latest movements, and I'll share those with you today.

First, let's take a look at what exactly happened to gold this week...

Why the Price of Gold Has Fallen 2.8% This Week

This chart shows just how the dollar has trended this past week: 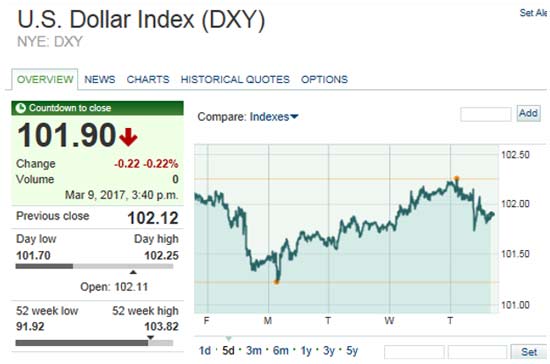 Even the DXY's backtracking on Thursday was not enough to attract gold buyers. The price of gold fell 0.4% to settle at $1,202.

Although gold's losing streak has scared many investors into selling, I still maintain that the long-term picture is much more bullish.

Here's my gold price forecast for the rest of the year...

My High Targets for the Gold Price in 2017

I think you have a misprint in the article talking about gold's come back
in 2017. You mention how gold continued it's decline on Tuesday
March 14, 2017. Today is March 10th
as I write this. Other than that I'm
feeling good about gold going forward. I really enjoy the articles.

Thanks for reading Money Morning. You are correct, the March 14 date is in error. We've corrected it to March 7. Thanks for letting us know!