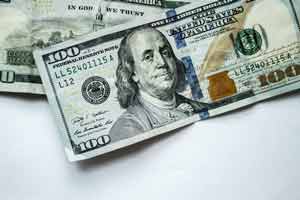 Dow Jones futures are flat as investors eye this week's meeting of the Fed Open Market Committee. Though the markets have largely priced in an interest rate hike later this week, the Dow is under pressure due to falling oil prices and a slump in energy stocks. Here's the latest on world stock markets and commodity prices.

Banking stocks are in focus as investors question the timing of President Donald Trump's economic policies. The markets have surged more than double digits since the November election on the hopes of corporate tax reform, the repeal of the Affordable Care Act, income tax reform, and other pro-business policies.

The Dow Jones Industrial Average is trading up 11 points in pre-market hours as investors await this week's meeting of the Federal Reserve and question new statements by the Trump administration. Over the weekend, President Donald Trump's administration raised eyebrows after Mick Mulvaney, the budget director, accused the previous administration of manipulating jobs data.

"What you should really look at is the number of jobs created," Mulvaney told CNN. "We've thought for a long time, I did, that the Obama administration was manipulating the numbers, in terms of the number of people in the workforce, to make the unemployment rate — that percentage rate — look smaller than it actually was."

Traders were reacting to Friday's weekly rig count from Baker Hughes Inc. (NYSE: BHI). The number of crude oil platforms has increased for 10 consecutive weeks and returned to levels not seen since 2015.

The price of gold was up nearly 0.3% in pre-market hours, a reversal of recent pricing trends.

Gold prices in 2017 have been sliding over the last two weeks as investors prepare for a rate hike. Gold prices hovered just above $1,200 per ounce Friday, and this level could be a very good entry point for investors. Money Morning Resource Specialist Peter Krauth projects the price of gold will hit $1,265 by midyear. But the real profits will be made toward the end of 2017. To see Krauth's year-end gold forecast, go here now.

But the big news is Mobileye NV (NYSE: MBLY)…

Check Out Our Latest Report: These "Second Salary" Plays Could Make You and Your Grandkids Rich