It may not be mentioned by investors as frequently as gold or silver, but platinum has proven to be a strong long-term investment. That's why we're going to share Money Morning Resource Specialist Peter Krauth's 2017 platinum price prediction today, which sees the metal rising 38.6% by the end of the year.

This event is so rare, it’s only happened twice in 20 years! The first time it created $1.25 billion in new wealth virtually overnight. The second time, it created a cash windfall of $6 billion. And it’s about to happen again. Find out more.

You see, platinum prices are up 3.1% to $938 per ounce over the last three months. That's better than gold's 3% rally, and it crushes silver's 0.3% loss over the same period. Platinum has also outperformed popular metals ETFs like the iShares Silver Trust ETF (NYSE Arca: SLV), which is only up 0.2% since December 2016.

Krauth - a 20-year veteran of the platinum, gold, and silver markets - says the price of platinum could rally another 38.6% this year, besting his 16.4% gold price prediction and 29.4% silver price prediction. And there are two important factors that will fuel platinum's double-digit return.

Before we get to his exact platinum price target, here's why Krauth is so bullish on the precious metal in 2017... 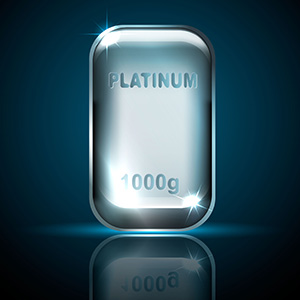 The most important thing to know about platinum is it's one of the world's rarest precious metals. In fact, it's much rarer than silver, gold, and copper.

Like those other three metals, platinum can be bought and sold via futures contracts on the New York Mercantile Exchange (NYMEX). There's a simple reason platinum is so expensive - far less of it is mined from the ground each year. That's because it's incredibly difficult to extract, which typically lifts operating costs and makes mining for the metal unprofitable for companies that can't handle the overhead.

According to Statista, the combined output of the top five platinum-producing nations - South Africa, Russia, Zimbabwe, Canada, and the United States, which make up 98% of global platinum production - was 168.9 metric tons last year. The 2016 global gold output of 3,100 metric tons dwarfs that platinum output.

Another crucial factor that determines the platinum price is its correlation to the U.S. dollar - similar to gold and silver.

Like gold and silver, the price of platinum typically has an inverse relationship to the dollar. Since platinum is a dollar-priced commodity, it increases in value when the dollar weakens and vice versa. That's because platinum becomes cheaper for users of other currencies.

Here's why the platinum price will climb 38.6% to our price target this year...