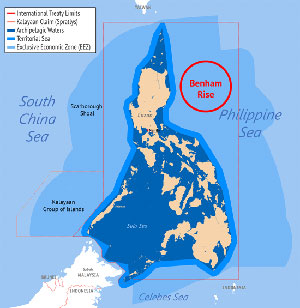 The Benham Rise continental shelf is off the east coast of the Philippine island of Luzon.
Click to Enlarge

In this most recent development of the ongoing South China Sea dispute, the Filipino president also requested that his military put up "structures" over this particular stretch of water known as "Benham Rise," Reuters reported this morning.

Precisely what kind of structures Duterte has in mind have yet to be revealed.

But it was in this particular area – Benham Rise – that Manila first spotted a Chinese survey ship roaming around last year, specifically between July and December.

Beijing's foreign ministry has claimed several times since that the vessel had a right to pass through the area under international law.

Despite China's claims, Duterte is insistent about scrambling his navy today in what he claims will be "friendly" military maneuvers toward China…

A "Friendly" Showdown in the South China Sea?

"My order to my military," Duterte said in a press conference this morning: "You go there and tell [China] straight that this is ours, but I say it in friendship."

Filipino Defense Secretary Delfin Lorenzana also spoke publically this morning about hastily boosting the small island nation's naval presence in the contested waters. He even went so far as to "accept China's explanation" that its survey vessel had a right to be there, reported Reuters today.

But then Lorenzana made a second, far more aggressive statement about Beijing's presence…