Despite gold's weakness since late February, the price of silver held on for an entire week longer than gold did before topping out.

Of course, that's typical of silver and very much par for the course…

The trigger behind the silver price decline was likely a combination of the expected interest rate hike on Wednesday and a rallying U.S. dollar.

A door has opened for an ultra-rare but powerful anomaly in the stock market… It involves a precious metal, one that's considered exceedingly more rare than gold. Get all the details.

Now it's here. Has it already run its course? I think it probably has.

If so, what will prompt the next leg up? I have a couple of thoughts on what the triggers might be. That's why I'll be sharing with you my silver price prediction for the rest of the year.

Why the Price of Silver Dropped 4.1% Last Week

After closing at $17.74 on Friday, March 3, silver prices opened slightly higher on Monday at $17.81 despite steady gains in the dollar throughout the afternoon. The metal retreated to close the session at $17.75 for a slight 0.1% gain from the previous settlement.

On Tuesday, March 7, the dollar's bullishness kept weighing on the silver price. On Tuesday, the price opened lower at $17.66 and kept falling over the course of the session. It closed at $17.48 for a 1.5% loss.

Wednesday was similar as the dollar went into rally mode, surging above 102 by midday. Silver buyers couldn't compete with sellers, and the metal settled at $17.21 for another 1.5% loss. 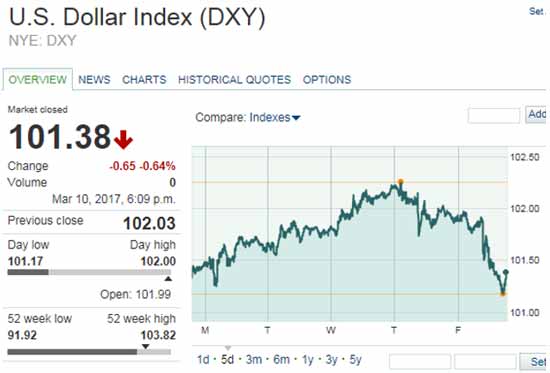 Buyers returned on Thursday, March 9, once the dollar peaked in early morning trading. However, this wasn't enough to boost the price of silver, which fell below $17 for the first time since Jan. 26. It closed at $16.94 for a 1.6% loss.

Friday saw a slight gain as the dollar sharply sold off. That boosted silver prices by 0.5% to close at $17.02. The metal still logged a weekly loss of 4.1%.

In my view, Friday likely marked the bottom of silver's correction. While we may see some day-to-day dips, I think silver prices will head much higher by the end of the year.