President Donald Trump has not spoken about his stance on the marijuana industry since his victory.

But his appointment of Alabama Sen. Jeff Sessions to attorney general – a role that has the authority to enforce federal law – caused a stir amongst supporters of marijuana legalization.

You see, Sessions called marijuana legalization a "tragic mistake" and argued the drug is "not the kind of thing that ought to be legalized" in an April 2016 Senate hearing.

However, trying to undo or reduce legalization at this point would come with serious political and economic hurdles. Interference of legal marijuana laws would mean the shuttering of hundreds of small businesses and the loss of thousands of jobs. It would also make for a lot of unhappy marijuana stock investors. 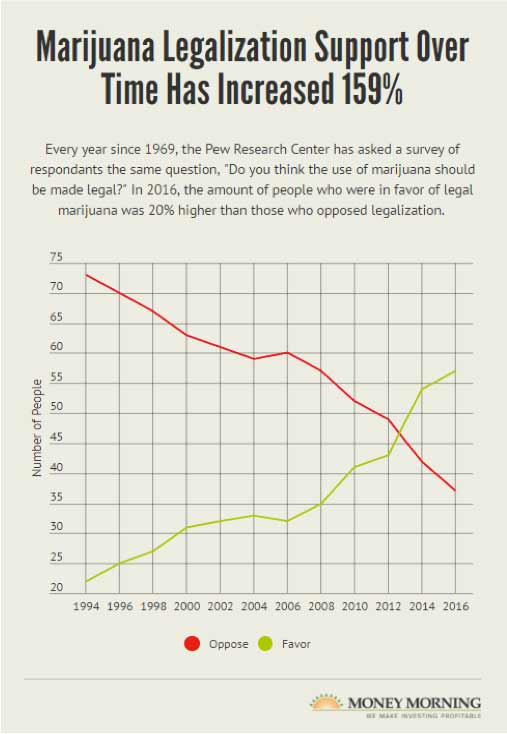 "It's certainly come so far," said Sam Kamin, a marijuana law expert at the University of Denver, to Time on Dec. 8, 2016. "It can't be undone without a heavy cost."

No matter what Sessions' agenda may be, the economic benefits of the marijuana industry cannot be ignored.

And these five charts are proof…

"It would be a very blatant finger to the voters [if Trump wages a war on pot]," said the Drug Policy Alliance's Amanda Reiman to Time on Dec. 8.

In the latest survey conducted in 2016, an overwhelming majority (57%) of respondents answered "Yes" when asked, "Do you think the use of marijuana should be made legal?"

Why Trump Should Support the Marijuana Industry: Half of U.S. States Now Have Legal Weed

On Nov. 8, 2015, eight states passed measures to legalize marijuana in some form. The grand total of states that now have legal pot (for recreational or medicinal use) is 28, plus the District of Columbia. That's a huge increase from just two states, Colorado and Washington, in 2012.

And in 2017, six more states are expected to legalize. 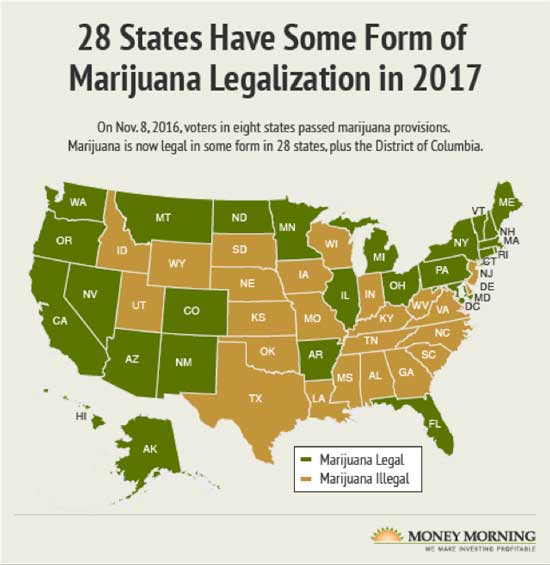 Voters in states like California voted for legal marijuana because they believe legalization is a "safer alternative to the drug cartels."

In fact, California Lt. Gov. Gavin Newsom wrote a letter on Feb. 23 attempting to persuade the president and his team that a regulated market for adult-use marijuana is preferable to what has existed in the past.

"The government must not strip the legal and publicly supported industry of its business and hand it back to drug cartels and criminals," Newsom wrote to Trump, with Attorney General Jeff Sessions copied in. "Dealers don't card kids. I urge you and your administration to work in partnership with California and the other eight states that have legalized recreational marijuana for adult use in a way that will let us enforce our state laws that protect the public and our children, while targeting the bad actors."

Why Trump Should Support the Marijuana Industry: Marijuana's User Base Now Reaches Far and Wide – and Is Growing

With California now aboard the legalization train, a total of about one-quarter of the population now lives in a place where voters have decided to legalize pot. 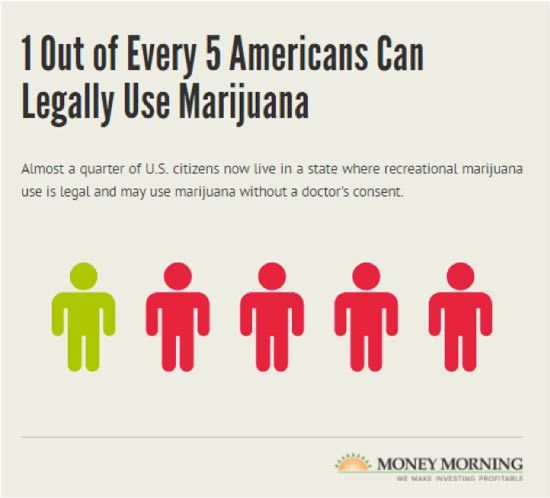 That means one out of every five Americans can consume cannabis legally — even without a doctor's prescription.

"The cannabis industry is one of the fastest-growing sectors in the economy and continues to astonish those in and out of the space," Giadha Aguirre De Carcer​, founder and CEO of New Frontier Data, told Business Insider in September 2016.

Next, we look at two benefits of the marijuana industry that Trump should be especially interested in. They were the cornerstones of his "Make America Great Again" campaign, after all…

Why Trump Should Support the Marijuana Industry: Jobs, Jobs, and More Jobs

New Frontier Data released an annual overview of the cannabis industry earlier this month, and the results were impressive.

The report found that the legal weed industry will create close to 300,000 jobs in the United States by 2020 as more Americans demand access. That's more than the manufacturing industry (which is expected to lose 814,000 jobs by 2024). 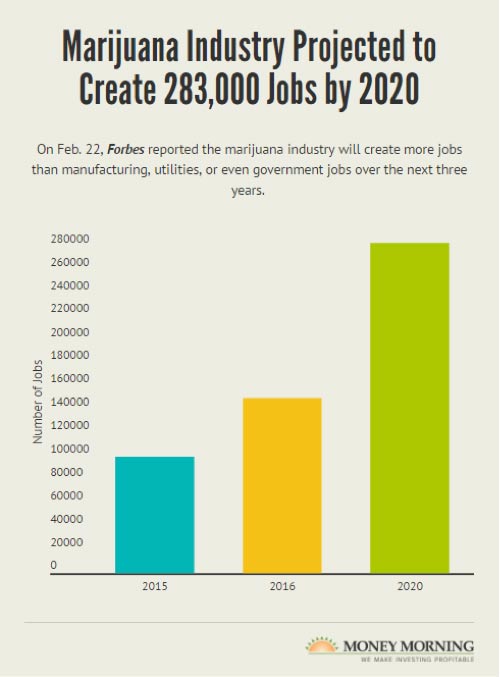 "These numbers confirm that cannabis is a major economic driver and job-creation engine for the U.S. economy," said De Carcer to Forbes on Feb. 22.

"While we will see a potential drop in total number of U.S. jobs created in 2017, as reported by Kiplinger, the cannabis industry continues to be a positive contributing factor to growth at a time of potential decline," said De Carcer.

Currently, according to Big Think, there are an estimated 100,000 to 150,000 workers involved in the cannabis industry directly and 90,000 in related businesses today.

Why Trump Should Support the Marijuana Industry: Marijuana Is America's New Cash Crop 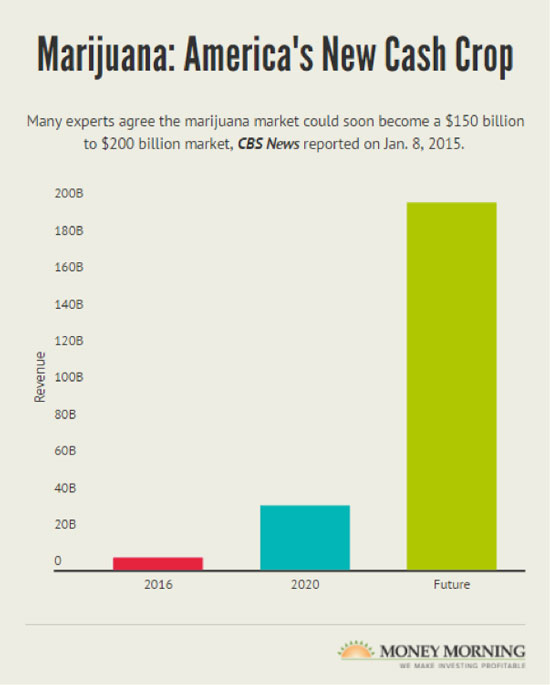 In 2016, legal marijuana sales totaled $6.7 billion – an unprecedented 30% rise from the previous year.

And experts are expecting those sales to grow by five times over the next few years.

In fact, the industry is expected to hit an estimated $35 billion in revenue by 2020, according to a recent report from GreenWave advisors, a research firm that serves the emerging marijuana industry in America.

Many experts believe it could eventually reach $150 billion to $200 billion each and every year, CBS news reported on Jan. 8, 2015.

And the revenue won't only benefit the industry…

You see, as more states legalize the drug, investors are lining up…

Brendan Kennedy, CEO of a marijuana-focused private-equity firm in Washington – one of the pioneer states of marijuana legalization – thinks the "smell of money is in the air."

Since the passage of the eight ballot measures in November, there's been a "surge of interest from investors who recognize that the end of cannabis prohibition is inevitable," said Kennedy in an interview with NPR on Nov. 20, 2016.

And New Frontier Data — the company that estimated the dramatic increase in job creation from the marijuana industry — also predicts that marijuana revenue will be states' solution to a lackluster economy.

"During this tough economy states are looking for any way to close their budget shortfalls and it appears that cannabis may hold an answer for them," said New Frontier Data CEO De Carcer in a statement on March 7.

Pot Stocks Creating Historic Cash Windfalls: A few dozen tiny marijuana stocks are set to deliver potentially once-in-a-lifetime windfalls. As a service to Money Morning readers, we're now making available our 89-page cannabis investing guide, The Roadmap to Marijuana Millions. This "bible of weed investing" features the absolute top 30 pot stocks in edibles, dispensaries, biotech, and more – all of which could make you a fortune. Click here to reserve your copy now!