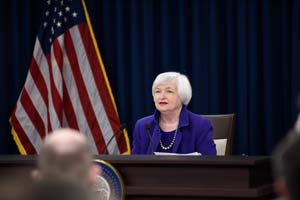 Today's DJIA news will center on a critical announcement from the Federal Reserve. This afternoon, the FOMC meeting will determine if interest rates will rise for the second time in three months. According to CME Group's FedWatch, the markets project a 95% probability that the central bank will increase rates by 25 basis points.

On Tuesday, the Dow fell 44 points as airline stocks faced pressure due to blizzard conditions on the East Coast and markets weighed a decline in crude oil prices.

The Dow Jones Industrial Average projected a 30-point gain as markets expect the third interest rate hike by the Federal Reserve in more than a decade. This afternoon, the Fed will release an announcement on its monetary policy decisions and Fed Chair Janet Yellen will hold a press conference.

The markets expect an increase in benchmark rates by 25 basis points. The Fed had hinted toward a rate hike last week after stronger economic data in job creation and inflation expectations bolstered confidence in the U.S. economy.

Crude oil prices have bounced off a three-month lows this week thanks to a surprise drawdown in U.S. inventory levels and optimism about OPEC's production deal to cap excessive output. The American Petroleum Institute announced yesterday that domestic inventory levels decreased by 500,000 barrels. Markets will turn to the official inventory report from the Energy Information Administration later this morning.

Meanwhile, the International Energy Agency released a surprise support hinting that OPEC simply needs more time to reach its goals of cutting production by 1.8 million barrels per day (bpd). The global oil cartel has been working with non-member nations like Russia to reduce excessive output and support crude prices.

But the big news comes from MSNBC...

Last night, MSNBC released information from President Donald Trump's 2005 tax returns. The story was hyped as a game changer before the release as the president was the first leader in decades to refuse to release his tax records during his campaign.

However, the 2005 return indicated that President Trump paid $38 million in taxes on income of $150 million. That works out to a tax rate of roughly 25%, a figure that is higher than the tax rate paid by Trump's predecessor (19%) and MSNBC as an organization (24%).