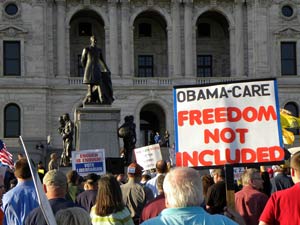 Why won't the GOP repeal Obamacare?

After all, it was their collective promise to do so that helped put our current class of congressional Republicans in office.

"If you like the doctor you have, you can keep your doctor [under Obamacare]. And if you like your [health insurance] plans, you can keep those too," he claimed in a June 6, 2009, press conference. Since then, hundreds of thousands of people lost their doctors as major insurers quietly began offering "narrow networks" – or a limited number of doctors and hospitals people could see. Insurance companies did this – without notice – to save money.

And after ACA enrollment officially started in October 2013, 50%-75% of the 14 million Americans insured through an individual or work-sponsored healthcare market that year received notices that their healthcare plans were being cancelled. This happened because Obamacare instated benefit requirements like mental health and pre-existing condition coverage that many individual market insurers did not automatically provide. Those plans had to be cancelled, leaving the newly uninsured left to start all over again.

So on Nov. 8, 2016, Americans elected a Republican majority into government…

Why Won't the GOP Repeal Obamacare Instead of "Fixing It"?

There have been varied answers from Capitol Hill as to why GOP legislators chose to issue the ACA "replacement bill" – the American Health Care Act (AHCA) – on March 6 instead of going for a full overhaul of Obamacare.

On March 8, during a GOP congressional debate in the wake of the AHCA's reveal, House Ways and Means Committee Chairman Kevin Brady (R-TX) told his colleagues, "We have a choice. We can act now or we can keep fiddling around and squander this opportunity to repeal Obamacare."

Utah GOP Sen. Mike Lee also spoke up amid the discussion and said that the GOP healthcare proposal was not the plan he was hoping for. "This is instead a step in the wrong direction," Lee stated. "And as much as anything, it's a missed opportunity [to repeal the ACA]."

Then, on March 9, Sen. Rand Paul (R-KY) argued in a Hill op-ed that when it comes to actually repealing the ACA, it's pertinent to keep that promise made to voters now… before tackling replacement: "[After repeal] we can have a separate vote on replacement legislation that will deliver lower costs, better care, and greater access to the American," Paul wrote.

And just this past Monday, Sen. Steve Daines (R-MN) aired criticisms of the House Republicans' Obamacare replacement law and its version of a "repeal and replace."

"We need to do better," he said in a statement to The Missoulian. "I want to see costs and premiums go down to make healthcare more affordable for Montana families."

To Daines' point, the AHCA indeed included some serious problems of its own.

In fact, we've identified two of potentially disastrous portions of the AHCA…

You really want to solve the health care problem in this country? All you have to do is limit congressional healthcare coverage to what the average American receives in this country. Problem solved and less expensive medical care for the whole country.You should have known from the past experiences with the GOP, that the poor working class was going to get royally screwed and the well to do were going to come out better.