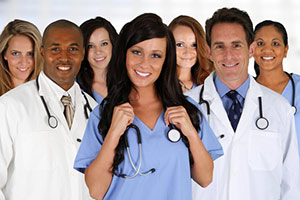 In Dow Jones news today, the Dow fell despite a positive round of economic data.

Healthcare stocks led the Dow's decline after President Donald Trump proposed a series of budget cuts in funding for medical research and a massive uptick in regulatory costs for the sector.

The news sent biotech stocks reeling. The iShares NASDAQ Biotechnology Index (ETF) (Nasdaq: IBB) fell more than 1%. Shares of Biogen Inc. (Nasdaq: BIIB) fell nearly 5% and was one of the largest weights on the Nasdaq, although the Nasdaq did barely finish in positive territory for the day. Meanwhile, shares of AbbVie Inc. (NYSE: ABBV) fell nearly 1% and weighed on the Dow.

But while everyone is talking about the Trump budget, the real threat to the post-election rally is happening with the debate over the Affordable Healthcare Act. Markets have roared higher since President Trump teased his new tax plan on Feb. 9, which promised to slash corporate taxes by 25%. But with Congress now racing to replace the Affordable Care Act, Money Morning Capital Wave Strategist Shah Gilani worries that could make investors question whether or not the tax cuts will actually come. Here's Shah's latest insight on what could happen next.

In economic news, U.S. homebuilding increased in January thanks to the construction level of single-family houses increasing to a nine-year high. Meanwhile, the number of Americans filing for unemployment benefits fell sharply. The strength of the labor market was one of the primary reasons why the U.S. central bank proceeded with a rate hike Wednesday.

Crude oil prices fell even though the Energy Information Administration announced a surprise decline in weekly crude inventory levels. The inventory report alleviated many concerns about a global supply glut. In addition, the interest rate hike boosted the value of the dollar, which helped push crude prices downward.

But the big story is the price of gold.

Gold prices added more than 2.1% after economists accused the Federal Reserve of being dovish about its monetary policy. According to the talking heads, Fed Chair Janet Yellen did very little to convince the markets that the central bank had any plans to accelerate the tightening of monetary policy in the months ahead. Gold prices are very sensitive to rising interest rates, as a stronger dollar tends to reduce the value of the precious metal.

Gold prices are expected to continue to rise in the months ahead thanks to a number of outside factors that aren't controlled by U.S. monetary policy. We expect gold prices to hit at least $1,400 by the end of 2017. While that would be a 13.6% gain, Money Morning Resource Specialist Peter Krauth has a way to make 50% -- even 82.1% on rising gold prices.

It all starts with owning some of the top gold mining stocks.