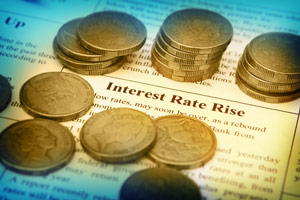 The Dow Jones news is the market's reaction to yesterday's interest rate hike. Dow futures are on the rise in pre-market hours a day after the U.S. Federal Reserve raised interest rates for the second time in four months. Markets are preparing for a heavy day of economic data, which included news that the Bank of England voted to maintain its benchmark interest rate at 0.25%.

Shares of Apple Inc. (Nasdaq: AAPL) pushed higher in pre-market hours a day after the stock broke through the $140.00 per share ceiling. The stock is sitting at an all-time high and continues to defy many Apple bears who spoke out against the stock when it sat at a 52-week low of $89.47.

On Wednesday, the Dow added more than 100 points after the Federal Reserve raised rates at the conclusion of the FOMC meeting yesterday. Following the Fed's announcement, central bank chair Janet Yellen said, "The simple message is the economy is doing well."

The Dow Jones Industrial Average projected a small gain a day after the Federal Reserve raised interest rates for the third time since the financial crisis. The central bank increased its benchmark rate to a range between 0.75% and 1%. Fed Chair Janet Yellen cited improved economic data in the U.S. jobs market and pointed to rising inflation figures as justification for the uptick in rates.

Crude oil prices extended their recent gains after the Energy Information Administration announced a surprise decline in weekly crude inventory levels. The inventory report alleviated many concerns about a global supply glut. In addition, the interest rate hike boosted the value of the dollar, which helped push crude prices downward.

But the big news is happening in Washington, D.C.

Republicans are under pressure over the potential repeal of the Affordable Healthcare Act. Many voters are asking the same question: Why won't the GOP repeal Obamacare? One of the reasons is that the entitlement program has widely been adopted by many Americans. Roughly 12.2 million people have signed up for healthcare this year.

But that's not the only reason why Republicans haven't repealed or replaced the law just yet.

We break down those reasons, right here.