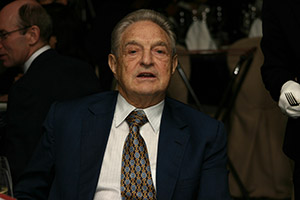 Some of the nation's wealthiest anti-Trump activists - including left-wing hedge fund billionaire George Soros - will meet later this week for the annual Democracy Alliance conference.

The symposium - which is largely funded by Soros and his infamous grant-making network known as Open Society Foundation - gathers every year in hopes of matching America's liberal, wealthy elite with organizations at the forefront of the anti-Republican movement.

One such organization hoping to garner large donations this time around is "Indivisible" - an anti-President Donald Trump consortium led by former Democratic congressional aides, including founders Ezra Levin and his wife, Leah Greenberg.

Levin, Greenburg, and Soros last gathered together on Nov. 14, in the wake of the 2016 presidential election, in order to retool and reprioritize the "big-money left" on how to fight back against Trump's presidency.

What came out of that closed-door meeting was a 23-page anti-Trump manifesto that was posted as a Google document a month later on Dec. 14.

The tactics suggested therein rang a familiar bell for some of its readers -- especially those aligned with the Tea Party...

Millions of people latched onto the manifesto -- at least, according to Indivisible's website. The Guardian, however, reported on Jan. 8 that Google couldn't offer an exact count of how many times the document was viewed or downloaded.

But we do know that it was picked up by mainstream media. Here are some headlines that ran immediately after its release:

So, even without knowing the exact number of readers the manifesto reached, it obviously garnered quite a bit of attention.

And within the well-received manual's 23 pages was a "step-by-step" guide explaining how readers could use a certain Tea Party tactic to disrupt the new Republican establishment...

Seems like a smart guy like Mark Cuban would understand and embrace the unintended consequence of free markets is higher quality and lower prices. A single payer system does away with free markets and free competition and adds government control. Since when has government run anything well? The best government can do is take from some and give to others. Thus picking winners and losers with the money of special interests, lobbyists and politicians calling the shots.

Both sides are not 100% right. Ever hear of compromise?

Betcha, you will use medicare and take your social security check. The USA
Government has done a pretty good job with both those programs. I never heard anyone say I don't want medicare or to receive my social security when I reach the age to collect.

I wouldn't expect to see anything about this 'person' soros on Money Morning. Don't you have any interesting finance stories that have some value?

Deregulation has never helped anyone. With this so call free market crap leads to Regular old GREED! When the Airlines and the Trucking Industry were deregulated, they said free competition was best. That didn't work either. The service got more expensive and less "servicing" to the customers. Without SOME oversite human greed takes over and it is "Every Man For Himself". Just look back in history.

Saving America would be the exact opposite of what "Indivisible" attempts to do. They are wanting to destroy America.

This is the same manifesto that Obama's presidency was based upon: Break America apart into various constituencies that will fight for causing internal strife and eventual collapse.

To save America means resisting "Indivisible."