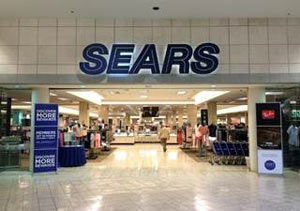 After Sears officials announced a "going concern" about the retailer's operations this week, the Sears bankruptcy probability in 2017 is essentially 100%. Companies don't just tell investors they're doomed unless there is no other course of action.

However, the issue is more complex than Sears Holdings Corp.'s (Nasdaq: SHLD) initial statement of "concern."

In fact, there are seven critical reasons Sears is on the verge of bankruptcy, taken directly from its annual report that was released yesterday (Tuesday)…

The company has faced increasingly tough competition as consumers become more price sensitive. However, the biggest threat to Sears, and all traditional retailers, is online shopping.

This holiday season, sales in brick-and-mortar stores were down over 10%, while e-commerce accounted for 25% of all retail purchases.

"The once-iconic American retailer badly misjudged the shift to online shopping and away from traditional retailing that had been its domain almost exclusively since 1893, when it was founded," Money Morning Chief Investment Strategist Keith Fitz-Gerald said.

Large portions of the inventory that Sears sells comes from overseas. This creates long lag times between when the order is placed and when the merchandise is received. This means that the company needs to forecast accurately which products and how much consumers will be interested in buying months in advance.

Forecasting accurately is almost impossible and leaves the company with either too much merchandise that it can't sell or not enough merchandise, resulting in missed sales.

Sears admitted that vendors frequently purchase insurance against nonpayment for merchandise delivered but not yet paid for.

Vendor financing of merchandise is common practice in the industry. Most retailers depend on it for financing holiday inventory increases.

The biggest concern is that vendor financing may being drying up. Vendors purchase insurance against default of payment. With Sears being a distressed company, the insurance may not be available to its vendors.

This could spell disaster during the holiday season, since vendors will not finance inventory without default insurance.

Sears Bankruptcy Concern No. 4: No Assets to Sell with a Junk-Bond Rating

Sears has pension funds that it is required to fund, and company officials admit they are underfunded at the moment. Because of this, the company will have to pay the benefits in cash, which it is lacking. In 2009, the company had $1.7 billion in cash. At the end of 2016, it had just $286 million in cash.

Due to agreements with the Pension Benefit Guaranty Corp., Sears is limited to what assets it can sell to pay for pension obligations. This leaves credit as the probable source of cash for payments.

The problem with credit is twofold. The first issue is that the company relies on revolving credit, and decreasing assets will limit how much Sears can borrow. The other issue is that Moody's rates Sears at a Caa1 level, which is a junk-bond rating.

The junk-bond rating makes credit much more expensive than it would be if the company had a positive credit rating.

Since Sears has not had cash flow from operations since 2006, the company's cash position is becoming increasingly worse. As I mentioned earlier, the company had six times more cash in 2009 than it does today.

On top of little cash on hand, the company has sold most of its valuable assets, leaving little left to sell to keep the bills paid.

The lack of cash is also going to affect the company's transformation efforts.

There is no definitive plan for taking Sears from the verge of bankruptcy to profitability. To make matters worse, the previous asset sales of Craftsman and Land's End did not lead to profitability for the company.

Without cash to buy time to come up with a plan, Sears will have to file for bankruptcy sooner rather than later.

The problem with these agreements are that at least 250 of them give both parties the right to "recapture" or take over the spaces. While this could be a good thing for Sears because it would allow it to reduce store size if needed, it can also be dangerous. Sears has no control over if and when the new property owner decides to evict it for a more profitable tenant.

The Bottom Line: While any one of these issues could pose major problems for a company, Sears is facing all of these concerns at the same time. This is a deeply troubled company that doesn't have many options to prevent bankruptcy at this point. It is all but inevitable the bankruptcy announcement will be made this year.

This is a sad situation, not just for Sears & Kmart but for other brick & mortar stores, they just did not have the insight to keep up with progress Internet sales), and Companies like Amazon ate them up. As Kmarts go, they refused to modernize their stores, they turned into "Junk" shops, the personnel & management is horrible, there is no supervison. Had they closed down all Sears and concentrated on modernizing Kmarts they may of been able to at least compete with Walmart. But it is too late now, sadly, others will follow, soon big box stores will go via the telephone booth & the typewriter.