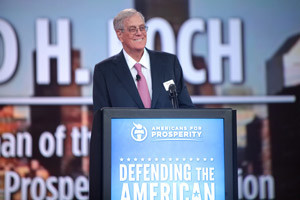 David Koch speaking at the 2015 "Defending the American Dream" summit.

After a media hiatus, the Koch brothers emerged yesterday (Wednesday) when spokesmen from their powerful network of conservative donor organizations lashed out against the passage of Trumpcare

"In seven years, we have never wavered in our commitment to a full repeal of [Obamacare]," declared Tim Phillips, president of Koch-backed conservative ad group Americans for Prosperity. "We want to make certain that lawmakers understand the policy consequences of voting for a law that keeps Obamacare intact."

The statement came less than 24 hours ahead of today's big healthcare vote from Congress. Republican leaders will decide whether to repeal and replace Obamacare with a bill known as the American Health Care Act (AHCA) -- also dubbed "Trumpcare" and "Obamacare 2.0."

There has been much contention among congressional GOPers over the AHCA since details were released on March 7. A group of conservatives in the House known as the "House Freedom Caucus" spoke out against the AHCA immediately after its big reveal. The group claims Trumpcare fails to fully repeal Obamacare and instead patches portions of it with arguably more damaging initiatives.

For example, the Freedom Caucus says the AHCA doesn't properly address and fix heavy-handed insurance regulations set out by the Obama administration, such as the requirement that insurance companies cover certain maternity and preventative care items.

In response to the backlash, President Donald Trump warned on Tuesday that the dissenters' House seats would surely be lost and replaced in the 2018 midterm election if they didn't fall in line.

The president singled out one defiant conservative lawmaker in particular - Rep. Mark Meadows (R-NC), chairman of the Freedom Caucus: "I'm going to come after you," the POTUS said in a closed-door meeting, according to The New York Times that day.

The multibillionaires have just pledged a "seven figures" fund to halt Trumpcare in its tracks -- and to threaten conservative representatives who don't fall in line...

That is rather ironic that a couple of billionaires are concerned about public health when their products are killing people. Most large corporations like them could give a "rats behind" about the common man as long as he buys the product. Doesn't the ideology go, "why educate them, just sell to them what they want". A drug dealer and prostitute could say the same. I wonder how the good Mr. Koch would feel if his life was in jeopardy and he couldn't afford the health care he needed to live? Talk about disconnect for your fellow man.

We were promised a full repeal of Obama care and that's what we want, we don't want some patched up crap put into law, give us what you promised or you are just part of the problem, In fact I think the government should just get the hell out of the healthcare business altogether because the only good healthcare you ever put together was for yourselves exclusively and anything you pass now you will exclude yourselves from having to take part. If you really want to help go after Big Pharm, insurance companies and hospitals for ridiculous pricing.