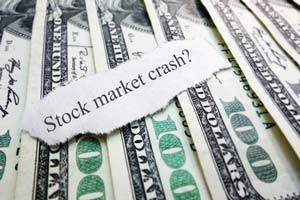 A stock market crash could be on the horizon as the U.S. Federal Reserve is moving forward with interest rate hikes. During the March FOMC meeting, the Fed hiked rates for the third time in two years.

And according to the CME FedWatch Tool, the markets are expecting at least two more interest rate hikes this year. That will push interest rates above 1% for the first time in nearly a decade.

But the Fed's actions are coming at a precarious time for the stock market, which has been on a record-breaking run since Donald Trump won the presidency on Nov. 8, 2016. The Dow Jones has shattered the 20,000 and 21,000 levels and notched a record 12 straight days of all-time high closes to end February.

While the soaring highs have undoubtedly been great for investors, many are also worried those highs coupled with ballooning interest rates could lead to a stock market crash in 2017.

A period of rate hikes, especially at the end of a long bull market like this one, can slam the brakes on stock market advances. Rate hikes make money more expensive. And more expensive borrowing can ultimately lead to a market correction.

That's why we're going to investigate why stocks are so high and why higher rates can bring them down...

Why Rate Hikes Can Lead to the Next Stock Market Crash

One of the main reasons stocks have been hitting all-time highs is historically low interest rates. And when those rates rise again, we could be looking at another stock market crash.

Starting in 2007, the Fed aggressively cut interest rates to combat the Great Recession caused by the 2008 stock market crash. By cutting rates, the Fed hoped companies would be willing to borrow money and grow their businesses. That would stimulate the economy and end the recession.

Shortly after that, the stock market began to roar back to life. After reaching its bottom in March 2009, the Dow has soared 212%.

That's been great for investors. But did stocks soar because of a growing economy like the Fed hoped?

Our data shows the economy grew slowly. Instead, low interest rates pushed stocks into artificial highs. Companies didn't use the cheap cost of borrowing to expand their businesses or take on new projects; they used their borrowed money to boost their stock prices and reward their investors.

Publicly traded companies have borrowed $1.9 trillion since 2008. During the same time, they've spent more than $2 trillion on share buybacks. That $2 trillion boosted stock prices higher than they would have gone otherwise and have possibly created a stock market bubble.

But large companies are not the only ones influenced by the Fed's move.

Bond investors have been essentially pushed into the stock market as low interest rates have undermined returns on bonds. That means investors looking for income had no other choice but to turn to the stock market. That shift in investment money also boosted stock prices higher than they otherwise would have gone.

And we know the low interest rates pushed stocks to artificially high levels through measures of stock valuation.

One of the most well-known metrics in stock market valuation is the Shiller price/earnings (PE) ratio. Right now, at 29.14, the Shiller ratio is 76% above its historical average. And it's higher than it was before the 2008 stock market crash, when it reached a height of 27.4.

The stock market is also overvalued if you look at corporate profits. Last year, the S&P 500's earnings per share (EPS) rose just over 3%. Yet the S&P 500 grew more than 17%. That shows share prices grew much faster than corporate earnings and could mean these highs aren't sustainable.

But now that we know stocks have been pushed up to new heights by low interest rates, investors need to be prepared for what happens when rates rise again. And now that the Fed is comfortable raising rates again, smart investors need to prepare for a coming stock market crash.

Having a stock market crash protection plan can help you keep your money safe and protected in the event of an economic collapse. Our three-point plan will show you the best and easiest way to guard your money and position yourself to gain from a recovery...