There's a strong chance shares of WWE stock will fall on Monday (April 3), and we've found a way for savvy investors to take advantage of this trend for a potential 88% profit…

Sunday night is WrestleMania, the biggest event of the year for World Wrestling Entertainment Inc. (NYSE: WWE). And that's an understatement. But with WrestleMania being both the creative and financial peak of WWE's year, traders are ready to exit once it ends.

WrestleMania Is a Massive Spectacle

The WWE's streaming service that hosts the event is nearly as lucrative. The WWE Network is the only way to watch the event outside of showing up at the stadium. That means for fans to tune in, they have to pay the $9.99 per month fee to get access to the WWE Network. With an average of 1.52 million subscribers before WrestleMania last year, that amounts to $15 million in subscriptions.

And traders respond to the money-making potential of WrestleMania every single year, causing a predictable shift throughout WWE stock history. That's why we're going to show you a simple strategy to make big profits from this WWE stock trend…

The WWE Network debuted in January 2014. Since then, the WWE stock price has dropped every year on the day after WrestleMania by an average of 16% and as much as 22%.

That's because traders anticipate the company's growth during the run-up to the WWE's biggest event of the year. And they cash out when it's over.

Last year, WWE reported a record $199 million in revenue for Q2, with 19% of its revenue growth that quarter due to WrestleMania. And WWE grew its average subscribers by 39% in the first quarter and hit a record-high average of 1.52 million paid subscribers in Q2.

Viewers interested in WrestleMania subscribe to the streaming service early to watch the build-up to the event. WWE Network viewers watched 21.7 million hours of shows on the network in the week leading up to WrestleMania in 2016. That was a 45% increase from 2015.

But the viewer and revenue numbers fell after WrestleMania. Revenue fell $35 million between Q2 and Q3 2016, while average paid subscribers to the WWE Network dropped to 1.41 million by Q4. 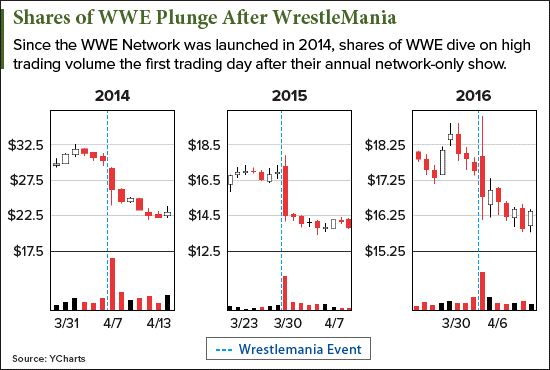 Those are huge one-day price collapses, and they happen on the same day every year.

While you're right to notice that those day-after WrestleMania drops are getting smaller each year, that trend is likely to reverse this year.

So WWE stock is already highly priced thanks to traders bidding the stock up ahead of WrestleMania. And that means it has more room to correct on Monday.

Here's how to play this trend and maximize your profits…

Our WWE Stock Strategy Could Bring You 88% Profits