Cuban's latest challenge to his fellow billionaire came Wednesday (March 29) in a tweet about the new president's plans to address the "exploding cost of college" in the United States: 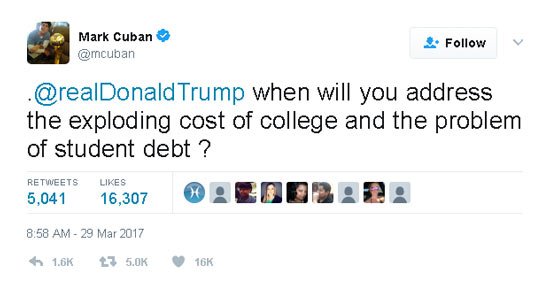 While on the campaign trail last year, Trump did mention an idea to tax wealthy universities that don't devote some of their endowments to low-income students. He had also suggested a repayment scheme for student loans that would allow borrowers to repay 12.5% of their income over 15 years.

But the president has not made further mention of these higher education ideas since taking office on Jan. 20.

Which could be the reason behind Cuban's tweet mid-week: Trump's silence on the student debt crisis.

Either that, or it was just another effort on the "Shark Tank" star's part to tease the public about a 2020 presidential run of his own...

Is Mark Cuban Going to Run for President in 2020?

The simple answer to that question right now is...

That's because Cuban doesn't know himself.

You see, before the latest rounds of presidential election campaigning kicked off in 2015, Cuban actively avoided politics as much as he possibly could, he told The Washington Post on March 15.

But when he learned that Donald Trump would be running, he decided he could no longer stay in the shadows.

Now it seems Cuban's decision to go public with his politics has morphed into thoughts on a 2020 bid...

For example, over the past month, the billionaire has made several references to a Public Policy Polling survey released on Feb. 23. The poll found that if Cuban were to seek the presidency in 2020 as Trump's Democratic opponent, he would trail the sitting president by just a single percentage point.

Cuban also told CNBC on March 12 that he wouldn't say "never" to a possible 2020 bid: "It depends on how things turn out."

In the meantime, however, it seems Cuban is content to continue offering to the public his political ideas via his website, BlogMaverick.

On March 9, he wrote about the benefits a single-payer healthcare system would provide the United States.

And on Dec. 19, 2016, Cuban implored Trump via his blog to spend billions of U.S. taxpayer dollars on robotics and tech investments in the United States.

As far Cuban's thoughts on higher education policy are concerned, he's touted many times his true reason for having attended Indiana University as an undergrad in 1981...