Chemotherapy and radiation have been cancer treatments since the 1950s, and in the meantime, science has developed more than 200 drugs to fight cancer.

All these established treatments have one thing in common. They're all more or less "one size fits all" treatments, procedures, or regimens.

But out on the frontier of cancer research where, as I've said, the most exciting, promising discoveries (and biggest profits) are made, there's a treatment under development that's going to disrupt the field for the next several decades.

I'm talking about powerful "bespoke" cancer treatments for every patient, using their own bodies to boot.

Not only will this improve and save lives, it'll also crack open a market worth $25 billion by 2025. It really is a revolutionary development.

The "A-Bomb" in the Cancer Fight

I can't overstate this. The treatment I'm going to tell you about, as well as the most important company pioneering it, will change cancer treatment the way the atomic bomb changed the face of warfare moving forward. 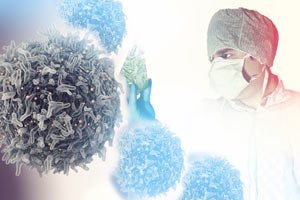 This biotech "A-bomb" is called immunotherapy, or "IO" to insiders. And it's progressing rapidly.

The technique is straight out of science fiction. Immunotherapy uses a patient's own immune system – "tweaking" it by either suppressing, stimulating, or enhancing an immune response – to effect a desired change. It can be used to vaccinate people and fight microbial diseases, reduce allergic reactions, suppress the sometimes devastating response to organ transplants, and, most promisingly, help patients destroy their own tumors and beat cancer.

Right now there are over 1,000 drug trials underway for IO candidates. The trials are mainly involving patients whose cancer isn't responding to traditional therapies like chemo or radiation and who are now terminal.

There's good reason to move with haste. The longer we live, the more likely we are to develop some form of cancer. It's always been a killer, but it's becoming a huge problem.

In addition to the human cost, treatments are now running about $10,000 a month, according to U.S. News & World Report. Insurers, doctors, researchers, regulators, and patients are all on the same page here. That's been an important driver in IO's development.

I'm bullish on this entire segment, and I'm not alone. Barclays is expecting IO to be worth $25 billion by 2025 – just eight years.

Now let me show you the company I think will reap the most benefit from this "frontier" research drive and incredible momentum.

This Small Company Is at the Top of the Pyramid

Canada is going to make the anouncement that they are going legal on Monday 10th April 2017. I wish your pod cast would be sooner.

The existing investors in Marijuana stocks will get new buyers at higher rates to make huge profits, these new buyers/investors should wait for at least 8-9 months to exit at the buying prices.They will make huge profits after 3 years. So new investors invest in Marijuana Canada stocks for not less than 5 years from now or wait for 6-7 months from now to invest in Marijuana stocks and try your luck in infrastructure stocks for the coming 6-7 months.