With the silver price in 2017 now up 13.9% this year, silver has become attractive for investors again.

The precious metal spent the last trading week above $18, climbing first, then holding steady even as the gold price retreated and the dollar strengthened.

I've been telling you that silver prices have enormous potential, and as we move forward in this precious metals bull market, the price of silver is likely to outperform the price of gold.

Keep in mind, though, that silver is volatile. One thing is certain; it won't rise in a straight line.  It's going to move much higher, but that's likely to happen in fits and starts.

Silver's looking really strong right now, but, as I'll show you, it may have gotten a bit ahead of itself in the very near term. A correction would not be a surprise, and for traders and investors, that should be treated as a buying opportunity.

Let's take a look at the silver price performance last week, then I'll give you my specific silver price target for the end of 2017.

This is an event so rare, it's only happened twice in 20 years! The first time it created $1.25 billion in new wealth virtually overnight. The second time, it created a cash windfall of $6 billion. And it's about to happen again. Find out more…

Overnight weakness wasn't enough to keep silver prices from posting more gains during the Wednesday session. After opening at $18.11, the metal grinded 0.3% higher to settle at $18.21.

All of this came despite consistent gains in the U.S. Dollar Index (DXY), which you can see in this chart here… 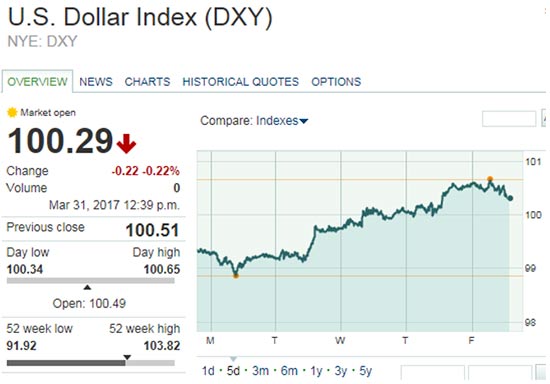 With last week's jump back above the $18 mark, it's clear that silver market sentiment is significantly improving. This shift is worth looking at more closely, as it can tell us a lot about where the silver price in 2017 is heading.