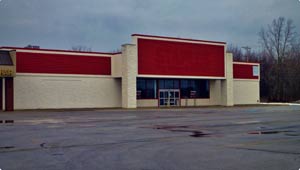 Struggling office supply giant Staples Inc. (Nasdaq: SPLS) may have just found a way out of its imminent demise... Sort of.

You see, Staples and its peers have been drowning in the face of competition from e-commerce giants like Amazon.com Inc. (Nasdaq: AMZN). In fact, Amazon now accounts for more than $1 billion of office supply sales in the United States - and those sales are growing by about 20% monthly, Fortune reported in May 2016.

And while the costs to compete are rising, Staples' revenue has been declining...

Indeed, Staples is just the latest example of how e-commerce has slammed retail stocks. Many more retailers are in just as much trouble...

Here's a look at the stores on our list of retail companies that might not make it past 2017 -- so far...

Staples deliver me any product in one or two days at my house or in there store at the same prices as Amazon , some better

I would really hate to see Staples stores go away. Not only do I enjoy browsing there, One of my best excuses for getting away is "I'm going to Staples. I'm out of______________(fill in the blanks).

We have established a relationship with the personnel at the local Staples.
They're very competitive and have not charged for much technical assistance received.
Also, items not in stock are ordered and delivered promptly.
BILL HACKENBERGER