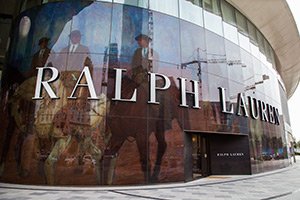 The 50-year-old American icon announced it shuttered its flagship store at Fifth Avenue and 55th Street in New York City on Tuesday (April 4). It will also close 50 other retail locations by the end of the fiscal year.

"The move highlights how higher-end brands are not immune to the broader troubles facing brick-and-mortar retailers from online shopping and other competitors," The New York Times reported on April 4.

On Feb. 2, just 15 months after he got the job, Ralph Lauren CEO Stefan Larsson announced he would step down.

You see, Larsson was the company's first CEO other than Lauren himself. And the founder was not ready to back down…

In fact, just one day after Larsson's appointment, Lauren emailed all employees:

"I will continue to lead [the company] today as I have for almost 50 years. I am not stepping down, nor am I stepping back. I am stepping up."

In other words, the new CEO wasn't really the CEO; Lauren was still running the show. It's surprising Larsson remained as long as he did.

"When you're named Ralph Lauren, and your company is named Ralph Lauren Corp., it seems clear that a large element of identification may be present. The problem is that monarchs often damage their companies by hanging on too long," Fortune reported on Feb. 2.

We've seen this before…

In fact, this same kind of monarchy power-grab was the exact thing that brought Sears Holding Corp. down.

Retail space on Fifth Avenue is one of the most expensive in a city known for already stratospheric costs.

However, landlords across this area have not had much sympathy for the troubles of the retail industry, according to The Times.

It's Simple – and Incredibly Profitable: This two-step investing strategy has uncovered more than 400 double- and triple-digit peak-gain winners. The next one's coming up soon – don't miss it. Learn more…

And according to BizJournals, these landlords are asking over 30% more per square foot than average in 2017.

The reason for the sudden uptick: New York City is expecting a drop in international tourism, and the landlords are desperate for the cash.

You see, NYC & Co., the city's tourism and marketing agency, projects that 300,000 fewer international travelers will visit the five boroughs this year, according to The Times. And while domestic travel is expected to remain strong, the group has cautioned that it takes four domestic travelers to equal the spending power of one international visitor.

The growth of e-commerce has come at the expense of traditional stores.

The retail industry – both low- and high-end — has been losing market share to online giant Amazon.com Inc. (NYSE:AMZN), which now accounts for over 43% of U.S. online retail sales. 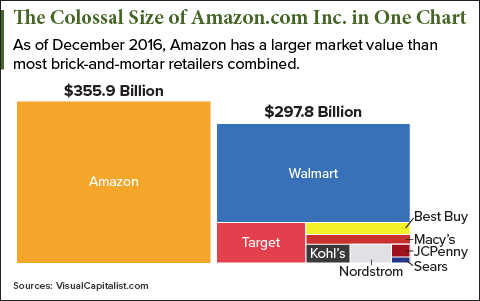 In fact, Amazon now has more market value than all major publicly traded department stores in the United States.

The online retailer alone is worth over $356 billion, making it one of the largest companies by market capitalization in the world, according to Visual Capitalist.

And it's changing the game for the retail industry…

Indeed, Ralph Lauren is just the latest example of how e-commerce giants like Amazon have destroyed retail stocks. Many more retailers are in just as much – if not more – trouble…

"There are several well-known retailers and grocers who are going to declare bankruptcy in 2017," warned Money Morning Capital Wave Strategist Shah Gilani to Members.

Indeed, it's going to be an ugly few years for retailers…

But these times will be highly profitable for traders and investors – if you understand how retail really works.

We've got a list of those failing companies and are watching the ticking clock on their debt service timing, right here.