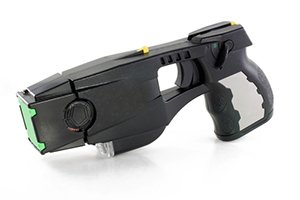 The company changed its name to better reflect the broadening scope of products the company develops for law enforcement and the military.

TASER is associated with the nonlethal conducted electrical weapons that the company started out making. While these weapons are still a large part of the company's portfolio, Axon has broadened its product line to include connected devices and software applications.

At the same time the company announced the new Taser stock ticker, it also unveiled an ambitious new project. Here's the project and what it means for the future of the company...

Lifting TASER Stock from Its Slump

The company announced today it hopes to outfit every police officer in the country with a body camera along with access to the company's cloud storage service for one year. Best of all, the company plans to do this for free.

Must See: Get $45,000 Worth of Our Best Stock Research for Just Pennies a Day.

While this program will have significant upfront costs for the company, it very well could be a brilliant marketing move.

By placing the technology into police departments around the country, they get to try the hardware and become dependent on the cloud storage. The goal is to entice departments to find funding for the ongoing support and storage of the footage in a potentially large market.

Currently, only about 20% of police officers in the United States have body cameras. That means Axon can potentially grow the market by four to five times the current size. On top of increasing the market size, Axon will also be able to secure a large share of that market.

According to Axon CEO Rick Smith, the company expects an 80% conversion rate. That is optimistic but it's OK since the company only needs 20% to 30% of departments to convert to paying customers for the program to be profitable.

This is good news for investors, as the TASR stock price has dropped 10% year to date. After a steady rise starting in May 2016, the stock dropped 11% between Feb. 27 and March 3. The drop occurred because the company lost the bid for a limited rollout of body cameras for the NYPD after being one of the top picks for the contract.

The stock is currently selling for $21.92 a share and fell as the announcement was being made. The price has almost rebounded up to the previous close price of $21.99.