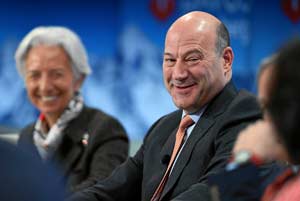 Gary Cohn at the World Economic Forum in Davos, January 2015

You see, the former Goldman Sachs Group Inc. (NYSE: GS) exec now supports a re-imposition of the Glass-Steagall Act - an idea that the U.S.' two main political parties support -- but that the country's top banks loathe.

This is a change of heart for Cohn. In February, the investment banker voiced his disdain for bank regulation measures when he said it was time to "attack the red tape of Dodd-Frank" in a FOX Business interview. Dodd-Frank is a less onerous regulation than Glass-Steagall. Bank stocks soared as investors considered the prospect of billions of dollars flowing back into their pockets. In fact, Goldman Sachs saw a jump of 1.29%.

The Glass-Steagall Act is the Depression-era law that kept brick-and-mortar lending separate from investment banking for more than six decades.

In other words, regular banks - the ones most Americans use to store their money - had to be separate from the banks that performed investing duties like security underwriting and trading. In theory, this kept big banks from gambling with your money.

"Glass-Steagall became the law of the land on the heels of 5,000 banks failing between 1929 and 1933," said Money Morning Capital Wave Strategist - and Wall Street expert -- Shah Gilani to Members in December. "Those failures hit depositors with more than $400 million in losses."

Now, Trump and members of his team - including Cohn - are aiming to bring the act back...

Some Banks Will Fail, Others Will Flourish

Dismantling the nation's banking giants isn't a partisan issue, which is one reason why Wall Street fears the idea could gain traction.

You see, prior to Glass-Steagall, banks were "totally free" to traffic in securities, said Shah. However, Shah pointed out that Wall Street had a "culture of recklessness, cronyism, and fraud in the use of depositor funds and in the promotion of securities for sale to the public" before the act.

Regardless, both political parties -- and many voters -- still resent that taxpayers had to rescue the industry with a $700 billion bailout during the 2008 financial crisis, according to Bloomberg.

You see, advocates for bringing the law back claim that smaller banks could be allowed to fail without threatening the overall U.S. economy or needing expensive bailouts.

However, Wall Street execs who are against Glass-Steagall counter that it would make U.S. lending less competitive with overseas mega-banks.

Indeed, bringing the law back would have consequences for banks, both large and small...

"A separation of investment and commercial banking would have a potentially bigger impact on global firms that have a big consumer banking unit," Brian Gardner, an analyst at Keefe, Bruyette and Woods said in a research note on April 6.

In fact, Goldman Sachs - Cohn's former employer of over 20 years - is an example of a firm that doesn't do much consumer lending while its peers, such as JPMorgan Chase, would be forced to make more dramatic changes.

"What Trump said on the campaign trail versus what he's saying now - and what his cabinet picks are likely telling him - will have a huge impact on how this goal is achieved, and what - if any - upside there is for investors," said Shah to members in December.

In fact, Shah outlined his own five-step plan - one that included reintroducing Glass-Steagall - for Money Morning Members.

Here's how Trump can deregulate the banks without crashing the economy and shocking Wall Street...

Not so sure about bank regulations but do know this.
America will never be great again with the federal tax based on production (income, savings and investment). America's Big Solution is the FAIRtax bill HR 25 / S 18. The FAIRtax moves the tax base from production to consumption with one simple progressive sales/consumption tax system with only one tax break, called the Prebate, that helps most the impoverished and lower income. With companion legislation the FAIRtax will renew our lost Freedom, Liberty and Civil Rights with the repeal of the 16th Amendment that enables direct taxation. Learn more and join the real/true tax reform cause at bigsolution.org and #FAIRtax

Curbing big banks ability to gamble with their depositors money is certainly a small step in the right direction, but the bigger challenge is repealing the Federal Reserve Act of 1913 that allows a private banking cartel to create counterfeit money as DEBT and collect interest in perpetuity. It is high time the bankers deceptive propaganda that they make their money on the "SPREAD" between interest on deposits, (almost nothing to-day) and what they charge on loans was exposed. This MYTH is still widely believed by the general public, i.e. that bankers maintain a 10% "RESERVE" and loan out the other 90% at the higher rate. That is a complete FICTION!

Canada's original Central Banker Graham Towers in sworn testimony before a Parliamentry Banking Committee in 1939 stated that "every bank loan is a new creation of money, and when it is paid back it ceases to exist" in other words banks do not loan out depositors money, they are simply the "RESERVES" against which they are allowed to "CREATE" 10 X the currency they have on deposit with simple key strokes on a computer or ledger entry, so this counterfeit money simple exists as a digital illusion not backed by REAL money which is gold and silver, hence fiat currency that has no intrinsic value since 1971 when Nixon took us off the gold standard.

This Ponzi scheme of "fractional reserve" banking would collapse instantly if everyone walked into their bank to-morrow morning to withdraw the funds they have on deposit because there is not enough actual bills available for payment, it exists largely as DIGITAL numbers or ledger entries, the actual CASH is only a small fraction of the total currency in the system based on the theory that not everyone will want to withdraw their funds at once, hence "fractional reserve" so for further enlightenment I suggest you watch Mike Maloney's You Tube series on "The Hidden Secrets of Money" that will clarify for you the distinct difference between currency and money. Don't let yourself be brainwashed by baanker propagands, GET THE FACTS!