The opportunity to invest in a young, upstart industry that will grow to dominate the economy does not come around often. But that's exactly what we're going to show you today.

Right now, renewable energy has the potential to become a $48 trillion industry.

And owning the right clean energy stocks could bring you unparalleled returns.

"There's now a confluence of technology and economy that assures these new energy sources will be adopted at ever-increasing rates," says Moors. "The profits will be just as big, too..."

But we'll get to that in just a minute...

Why the Renewable Energy Industry Is Set for Explosive Growth

Clean energy began as a way to produce energy without depleting or polluting the environment. But clean energy's biggest selling point now is its price.

Not only are energy sources like wind, solar, and hydro essentially free, they can never run out, unlike fossil fuels like oil, natural gas, and coal. That might sound obvious, but it has a substantial impact on the market price for these resources.

For instance, the cost of drilling affects how much oil companies can profit. As oil supplies dwindle, oil producers have to turn to increasingly difficult sources of oil, and that gets expensive. Much of the vast shale oil deposits in the United States aren't profitable unless oil prices rise significantly.

Fortune 500 Firms Rush Toward This Breakthrough: Find out why experts believe this breakthrough could grow 80,000% in the near future. Click here...

That explains, in part, the fate of the declining coal industry. Coal isn't abundant enough to be produced cheaply, and new technology has made natural gas far easier, and far cheaper, to produce.

"Worldwide, the amount of electricity produced by solar has doubled seven times - just in the last 16 years," according to Moors. "Wind has doubled four times in the same period."

And global demand will keep rising...

The chart below shows the EIA's projected growth for the dominant sources of electricity, including their projection for rising natural gas prices. Both predictions show big-time growth for renewable energy through 2040, with clean energy sources passing coal not long after 2020. 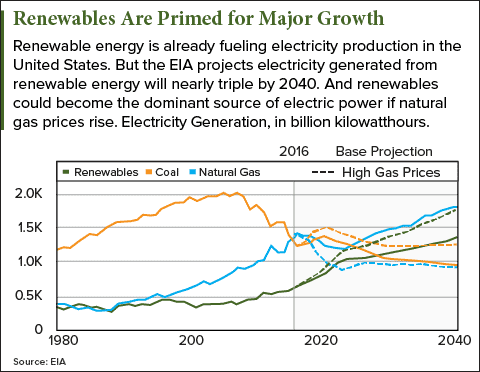 The explosive growth expected in the coming years means renewable energy stocks could deliver the life-changing gains we mentioned before. If you want to get in early on an industry that could soon meet the world's energy demands, then there's no better time than now.

And as we promised, Moors has picked the clean energy stocks that are best positioned to skyrocket as demand for renewables grows.

Moors says clean energy breakthroughs have slashed the cost of solar energy by 99%. That could make solar energy cheaper than even natural gas in many areas.

Here's how to cash in on the explosion of renewable energy, including Moors' top clean energy stock pick...

How to Make Massive Profits from Clean Energy Stocks

Based on projections by the International Energy Agency, Moors calculates that $48 trillion could potentially pour into solar energy in the coming years.

That's why he's keying in on this solar company that's made a revolutionary technological breakthrough in solar energy. But the company Moors is recommending today has taken solar cells to a whole new level. And it's helping bring the cost of solar power down by a stunning 99%.

That's huge because the only reason sun power hasn't gone mainstream before is the technology necessary to harness solar energy has been too expensive.

And this company is preparing an announcement that will likely send its stock into orbit, delivering early investors 10, 15, even 25 times their money for starters.

If you could only own one solar company for the next 10 years, this would be the one.

And to give you a hand up on investing in solar energy, Moors put all the details in a special briefing called "Total Domination: Ride Solar's $48 Trillion Energy Revolution!"

That means Moors is offering you access to his top solar stock play and his special briefing on solar investing. Find out exactly how to get this briefing right here...

With so much solar energy on the rise then silver prices should rise also. Am I right?

I’m so glad I read this Report!
I think ???? I’ll go over to Moors Site and See What I can learn about this NEWEST SOLAR Recommendation ??