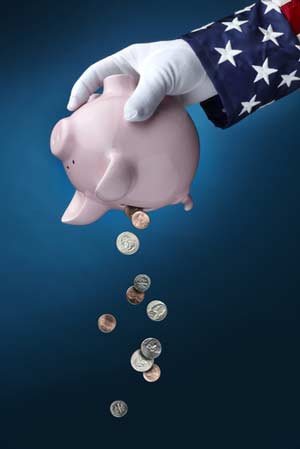 It's a nightmare scenario: With little or no warning the government seizes your retirement savings in a desperate move to make debt payments.

Many Americans don't think this it could ever happen in the United States. How could the government just take your retirement savings?

The answer is that it could – and it'll be tricky about it.

"[Government officials] will nationalize retirement savings such as 401(k) plans and IRAs," said Money Morning Chief Investment Strategist Keith Fitz-Gerald. "They'll sweep all that money into a national pool and then present it to the American people as if they're doing us a great service."

The bureaucrats will explain that the current system of saving for retirement is too risky, Fitz-Gerald said. Having investments in stocks and bonds exposes people to possible losses, they'll argue. And they'll use the major stock market crashes of 2000 and 2008 to make their case.

The government will present itself as savior and protector. Putting your retirement assets under Uncle Sam's control will be hawked as the smart and practical way to go. Trust us – we'll keep your money safe and guarantee you a return.

Your retirement money will be put into ultra-safe government bonds, in exchange for which the government will pay you a guaranteed rate of interest – probably 3%. But unlike a 401(k) or Individual Retirement Account (IRA), you'd have no control over the money. Even getting it back out when you need it could get complicated.

And despite assurances to the contrary, the exchange of government bonds for what you own now will represent a fundamental change to the nature of your retirement holdings.

Instead of investments of value, such as stocks and mutual funds, you'll own government debt. The government will spend your retirement money and in return you'll get an IOU.

And the government has plenty of motivation to do it…

Why the Government Needs Your Retirement Savings

Federal spending has been out of control for a long time. Every year the government spends more than it collects in revenue, adding to the national debt. As recently as 2008, the national debt was $10 trillion. Now it's $20 trillion. 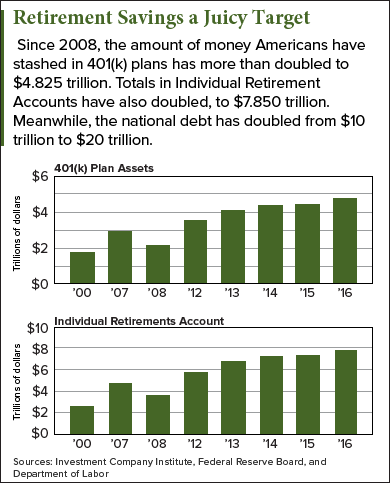 And because mandatory spending – which includes Social Security, Medicare, and interest on that $20 trillion debt – makes up two-thirds of the federal budget, there's no easy remedy.

"The government is spending money like a drunken sailor, and they need to get their meat hooks into any cash stock pile they can," Fitz-Gerald said.

According to the Investment Company Institute, Americans had $25.3 trillion in retirement assets at the end of 2016. Half of that, about $12.68 trillion, sits in 401(k) accounts and IRAs.

Should the U.S. government cook up some form of bonds-for-savings scheme, it would not be the first to tamper with its citizens' retirement savings.

In 2008, Argentina "nationalized" $30 billion worth of private pension funds.

In 2011, Hungary told citizens to either transfer their private retirement savings to the government or forfeit any right to a state pension (Hungary's version of Social Security).

In 2014, Poland transferred 51% of private pension assets into the state-run system.

And while the U.S. government has yet to put its hands on private retirement savings, what it has done with the $2.8 trillion paid into the Social Security Trust Fund may foreshadow what lies ahead…

The Shocking Truth About the Social Security Trust Fund

The U.S. precedent for converting retirement savings to debt was set with the creation of the Social Security program.

Few realize that the Social Security Trust Fund exists only in the form of "special obligation bonds." Any payroll taxes not needed to pay current beneficiaries is spent in the year they're collected and replaced by these bonds – IOUs – represented by a stack of papers stuffed in a West Virginia filing cabinet.

To be clear, every surplus dollar paid into the Social Security Trust Fund already has been spent, be it on defense, welfare, or congressional salaries.

And the bill for this hijacking of the trust fund is about to come due.

The Ultimate Retirement Action Plan: This Could Mean the Difference Between “Adequate” Savings and the Retirement of Your Dreams. Click Here Now…

As long as Social Security collects more money than it pays out, the money helps reduce federal budget deficits. In recent years the payroll taxes haven't covered the payouts, but interest payments from the U.S. Treasury on the bonds more than made up the difference.

That ends in 2020. That's the first year revenue from interest and the payroll tax will fall short of covering the required payments to beneficiaries. And the gap will grow larger every year after that.

This is why the Social Security Trust Fund was created – to compensate for that growing shortfall (the $2.8 trillion is expected to last until 2034).

But because the fund is nothing more than a debt obligation, money from the federal budget will be needed to redeem the bonds.

The Money Has to Come from Somewhere

The Washington politicians could drastically cut spending (don't make me laugh) or jack up taxes and risk getting voted out of office. Or they could ramp up borrowing, but that will only speed up accumulation of the national debt.

Given those politically repugnant choices, "borrowing" the retirement savings of millions of Americans will start to look like an attractive option indeed. Especially if it can be sold as a "benefit."

In other words, the need to plug the swelling budget hole from repayment of the Social Security Trust Fund is the most likely catalyst for the government to target private retirement savings.

The government has been anticipating this for years, experimenting with ways it could pull this off.

As far back as the Clinton administration, the government cooked up something called I-bonds in an attempt to lure some retirement savings into government coffers.

I-bonds earn interest (part of which is based on inflation) and are structured to be long-term investments.

During the 2008 financial crisis, there was talk about requiring workers to contribute to a government-run retirement program in addition to Social Security. Since the deposited money would be managed by a government agency, it's safe to assume a large portion, if not all of it, would end up going into government bonds.

In Congress, countless Automatic IRA Acts have been introduced over the past decade. Several, like one drafted by Rep. Richard Neil (D-MA) in 2013, would have put contributions by default into something called an R-bond.

R-bonds never quite materialized, but something else did – the myRA program, touted by President Obama in his 2014 State of the Union address.

Intended for workers at companies that don't offer 401(k) plans, the myRA is a Roth IRA with a special difference. The only investment option is, you guessed it, a government bond.

And states are getting in on the act, too. Eight states have passed laws to create state-run retirement plans for those who have no option of a 401(k) plan. It's likely these plans will funnel more money to government bonds.

California's Secure Choice program, for instance, is expected to put money into myRAs, at least initially.

So far these plans are voluntary, but advocates aren't shy about their desire to make participation mandatory. And that will mean guaranteed money funneled into government bonds.

Once that happens, it won't be as much of a stretch to convince Americans that the rest of their retirement savings also would be better off under the government's umbrella.

You might even hear what President Ronald Reagan once called the nine most terrifying words in the English language: "I'm from the government and I'm here to help."

More on Retirement: With 401(k) plans at risk for government takeover, it’s not enough to sit back and wait for it to happen. That’s why Money Morning Chief Investment Strategist Keith Fitz-Gerald has zeroed in on strategies offering aggressive income potential. He’s found a special class of investments he calls “26(f) programs” that give investors the opportunity to tap into huge monthly income – $2,000… $5,000… or more – every month for the rest of their lives. Click here to learn how it works…

I was wondering whether a current Roth IRA established twenty years ago could be taken by the government. After all, taxes were paid on it already and has existed for a very long time.

Thanks for reading Money Morning! Since the government technically wouldn't be "taking" anyone's money, but replacing it with government bonds, there's no reason why a Roth IRA would be immune. From their perspective whether the taxes were paid up front or years later when the money is withdrawn doesn't matter. The government just wants the assets. That's one reason this will be so sinister.