President Donald Trump wants to put "our miners back to work," but unfortunately -- he can't.

It's not because of political reasons; it's simply because the coal industry is dying, and the jobs just aren't there.

The once $34 billion coal industry has an "increasingly dim employment prospect," according to the Institute for Energy Economics and Financial Analysis's (IEEFA) 2017 U.S. Coal Outlook. IEEFA also notes that "promises to create more coal jobs will not be kept - indeed the industry will continue to cut payrolls."

Money Morning Global Energy Strategist Dr. Kent Moors put a timeline on the death of coal for readers back on May 17, 2016, when he said that "the black rock (coal) has 12-18 months at the outside before conditions get so bad that coal (and nuclear) plants begin to closing in earnest."

And it looks like his prediction was spot on...

U.S. Coal Consumption Isn't What It Used to Be

At least six plants that rely on coal have closed or announced they will close since November 2016. And one of those six is the largest power plant in the Western United States, the Navajo Generating Station in Arizona.

That's because companies are moving from coal to fuels and electricity generation. "The amount of coal in the national energy mix has declined 53% since 2006," according to the Department of Energy. 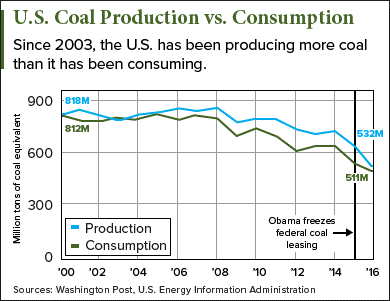 However, during the same time frame, electricity generation from natural gas increased 33%.

Not only are power plants moving away from coal, but so are workers. What was once an industry that employed 862,536 workers during its peak in 1924 has dwindled down to 1/20th of what it once was...

This Chart Says It All: There Aren't Any Coal Jobs to "Bring Back"

"We're going to get those miners back to work...the miners of West Virginia and Pennsylvania...Ohio and all over are going to start working again...They are going to be proud again to be miners," said President Donald Trump on May 5, 2016.
It's not that coal jobs don't matter -- in fact, they matter very much to the people who have them and communities they support.

"We're going to get those miners back to work...the miners of West Virginia and Pennsylvania...Ohio and all over are going to start working again...They are going to be proud again to be miners," said President Donald Trump on May 5, 2016.

But if there's to be a significant impact on the economy by increasing the number of jobs available to workers in the United States, bringing back coal jobs just won't cut it...

From March 2009 to March 2016, coal mining and support employment declined nearly 40%, according to the Bureau of Labor and Statistics (BLS).

And according to the Census Bureau's County Business Patterns program, the coal industry employed 76,572 people in 2014.

These numbers include miners, office workers, sales staff, and all others who work at coal-mining companies.

While 76,572 jobs may seem significant, it's actually quite small compared to other industries -- roughly half of, say, the number of jobs in the car wash industry: 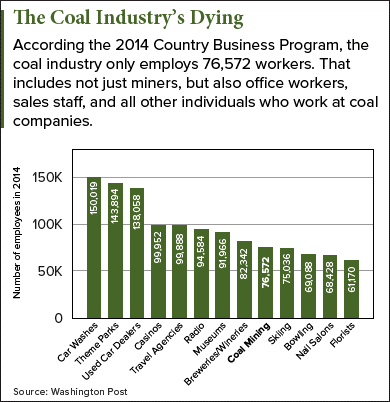 The World's First "Universal Fuel": Physicists have known about an unlimited source of free fuel for over 100 years. And now, thanks to a stunning breakthrough in chemical engineering, we have the ability to power the entire planet for over 36,000 years. And the cost of this fuel is zero. It's free. Click here to read more...