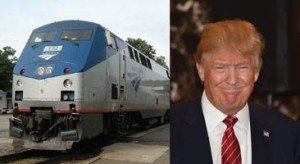 President Trump's latest budget proposal would slash 13%, or $2.4 billion, from the Transportation Department and terminate federal funding for Amtrak, the train service that services nearly 31.3 million customers per year.

Specifically, the cuts target Amtrak's long-distance services, like its California Zephyr line. These services "long have been inefficient and incur the vast majority of Amtrak's operating losses," according to the budget proposal document.

Like most federally funded "businesses," Amtrak carries a hefty operating loss each year. In 2016 alone, for example, the company reported an adjusted operating loss of over $227 million.  Over the past 10 years, Amtrak's lost a staggering $5 billion.

The mainstream media has been quick to declare the president's proposal as a disaster...

The New York Times called the budget cut a setup for "the hair-pulling transit apocalypse" on April 11.

"These cuts are unnecessary and shortsighted," said The New Yorker on March 16.

However, we're seeing another side to the budget proposal.

This move to cut spending for Amtrak may actually save America's commuter rail system.

Profits Work for a Reason

"The first law of capitalism is that profits exist for a reason - because customers are buying what's on offer," Money Morning Chief Investment Strategist Keith Fitz-Gerald said on April 11. Fitz-Gerald's long been a staunch opponent of government involvement in business.

"This nation desperately needs high-speed rail, not more tradition unimpeded by progress."
Only Amtrak customers haven't been buying for a long, long time. In fact, when Richard Nixon's administration consolidated various passenger train operators into a single national rail service in 1970, it was an attempt to adapt to falling ridership and to sustain passenger rail travel.

In other words, Amtrak was set up as a for-profit company receiving government subsidies at a time when profits were already in question.

Noted Fitz-Gerald, "I don't know if customers were not riding because they didn't want to or because the service was and is so far below global peers in Europe and in Asia. Either way, this is nothing new."

According to a 2015 profile of Amtrak in The National Journal, "the tension between Amtrak's for-profit mandate and money-losing reality has always dogged it. In 1997, Congress mandated that Amtrak become self-sufficient by 2002 or get liquidated. It didn't, and it wasn't."

To this day, Amtrak has never turned a profit.

What's more, the company "depends on the largesse of the taxpayer," said Fitz-Gerald.

Just last month, an Amtrak train derailed at New York City's Penn Station. The derailment delayed over 300,000 passengers, and eight of the 21 tracks under Penn Station had to be shut down for almost two days.

Not only were the interruptions inconvenient, but they were also costly...

In fact, the Partnership for New York City estimates that every hour train commuters from New Jersey and Long Island are delayed costs Manhattan employers alone over $14.5 million.

According to Keith, it's time for America to step up and do something about this crumbling infrastructure. "This nation desperately needs high-speed rail, not more tradition unimpeded by progress."

Indeed, there are much better - and more profitable - opportunities here to consider...

Amtrak's Trash Could Be an Investor's Treasure

Trump's move to defund Amtrak will force the company to sink or swim.

"It's about time Amtrak is left to its own devices. Every government that has ever tried to protect the inevitable in any industry has failed. Solar energy... busted. The EU carbon market... busted. Federal biofuels... busted."

Fitz-Gerald went on to explain "that's because every government backed industry has an incentive to act in ways that run counter to the public's industry. There's no profit... just entrenchment. So you have no reason to change behavior or to reallocate resources from the unworkable to higher, better uses. Private industry, on the other hand, rewards value, quality, and performance - and losses are often the point at which they learn."

"Whenever you have a situation like this," said Fitz-Gerald, "smaller, more profitable, nimble, more aggressive companies fill the gap."

In fact, the competition has already started...

Tesla Inc. (Nasdaq: TSLA) CEO Elon Musk has proposed and begun testing for a "Hyperloop" that will shuttle people between Los Angeles and San Francisco in only 30 minutes.

Fitz-Gerald applauds the move, observing that Musk has essentially thrown down the gauntlet, saying to the government that "if you can't or won't do this, I will."

The Bottom Line: Trump's decision to drastically cut back spending for Amtrak may actually do the entire rail transportation system a favor. It could allow Amtrak to fall on its face while making way for a reformation by innovative, private companies.

"Change is scary for a lot of people, but most of all for government regulators who don't know any other way but to spend other people's money with near zero accountability," said Fitz-Gerald. "Inevitably, though, change is a sign of the times - there's no putting the genie back in the bottle when it comes to innovation, period."

This is not a solution for people who use the service. What rail system in other countries makes a profit? Trains unlike planes do not serve only 2 endpoints, but many more which are in areas who have supported Mr. Trump, me included (who also has promised infrastructure improvement). Many of these mid-points have poor access to other transit modes. Besides this there are many who do not or will not fly! Also why should it be legislated that people must be forced to be 30 some thousand feet in the air in some man-made machine while feeling like a sardine in a can, breathing recycled air and subject to great vulnerability? The days of declining rail patronage due to car and air traffic are over. It is easily discerned that those who despise rail service do not use the system or ride and assume that everyone wants to get to their destination yesterday. Not so. Also Amtrak's accounting system shifts a disproportionate amount of operating costs from the northeast corridor to long-distance trains giving a somewhat inaccurate view of reality. It has been found that about 2/3 of long-distance passengers are travelling less than 600 miles. For these reasons I and many others support passenger rail.

Long ago, the Penn Central RR developed a study, backed by mathematics, that said the way to make money was to offer short, frequent, trains. A one car train leaving every 6 hours makes more money than a 4 car train leaving once a day. The people running AMTRAK are so in love with the picture of a long passenger train that they have ignored this rule and now run the California Zephyr once a day in each direction. In Denver the Westbound train arrives at 10:30 AM and the Eastbound train Arrives about 7PM. The long routes out west are nothing like the East Coast routes. The East Coast train from NYC to Wash DC runs several more times in any 3 hour period than the Zephyr does in a day. Are you really willing to throw your money down the rabbit hole of keeping the long, scenic routes open?

Amtrak lost $5 billion in ten years. Oh go have a cry! We dump $12 Billion a month in the Mideast with on going war and infrastructure and education suffer. Let's not worry about the dollar bill you can't find in your pocket, and worry about the other financial hemorrhage.

What Casey Wilson conveniently fails to mention is that Amtrak covers 91% of its costs. Highways by comparison, cover only 51% of their costs on average. We need to invest more in passenger trains and less in roads.

As has already been mentioned, most of the long distance train passengers are people who board and disembark somewhere between the start and end points of the route. Some of those place, if not most, have no bus service, no airline service and in some cases are even many miles away from a major (Interstate) highway. I have no great fear of private companies running passenger trains, but we must remember that Amtrak exists because the private freight railroads could not make money moving people. If we are serious going to upgrade our infrastructure, including highways, why don't we use some of that right of way for passenger rails, then let private companies run passenger trains on them….(for a fee of course)? Passenger trains need to get off the freight tracks to be efficient, and, the rails need to be like highways….pay for the upkeep, but don't own them.

Amtrak has the same problem United does — a total lack of customer focus.

Look at one of it's successes — the Downeaster, running a route the Boston & Maine RR abandoned in 1962. Partially funded by the State of Maine, it is responsive to local needs because of the state funding and management — Amtrak operates it, but some other outfit runs it.

Track upgrade, including bridges, signals and the overhead wire between New Haven & DC are issues, but Amtrak needs to prioritize service. If a storm knocks out the electric, why not run Diesels through Connecticut for a day rather than discontinue service?

So in My opinion AMTRAK should be privately owned and operated the Federal Gov. Should have nothing to do with this origination. A government owning a corporation is a principle of Communism. Let an entrepreneur purchase this company. The customers will win with a much cleaner better run company.

This article is the same nonsense as has been peddled for decades by the Heritage Foundation. ALL forms of transportation receive a tax subsidy. The airlines would not make a profit if they had to pay for the airports.The fees they pay do not come within light years of covering their costs. Estimates for airline subsidy:10 billion. Similarly, bus companies pay a small fraction of the costs for the interstates they drive on. The difference is that airline and bus subsidies are INDIRECT whereas the Amtrak is a DIRECT subsidy and so is an item in the budget. Hence, it is a big target for budget cutters who want to grandstand for the taxpayers. Repeat, without massive indirect tax subsidies airline and bus companies would have been insolvent years ago. The Heritage Foundation knows this so their objections to Amtrak are entirely dishonest.
Why do the airlines get to treat their passengers like cattle? Answer: Because unlike in Europe and Asia there few alternatives to flying. Every industrial country in the world has an extensive and efficient passenger rail system that competes with air and bus. We need a NATIONAL rail network fully supported with the kind of tax subsidies the airlines and bus companies have. Instead we have stupid and demeaning insults: The trains are ridden only by "hobbyists"(one of their favorite terms), retirees, people afraid to fly, etc Nonsense. 32 million passengers are not a bunch of "hobbyists". If this Trump budget passes it will deprive 24 states(mainly Red) of all passenger service and result in the direct loss of 4000 experienced rail jobs. Amtrak is the most efficient passenger rail company in the world covering 94% of operating costs from the fare box.Contact your Congress people. SAVE AMERICA'S LONG DISTANCE TRAINS!