The global market for alternative energy soared to $1.35 trillion last year, and that's just the beginning of this explosive industry growth.

For savvy investors, right now is the perfect time to get in early on alternative energy investments as renewable energy begins overtaking the energy market.

That sort of growth alone makes investing in energy a profitable strategy. But the source of the world's energy is rapidly changing.

The EIA forecasts clean energy investments like solar, wind, and hydro could pass coal and natural gas as the top source for electrical power in the United States by 2040.

That's why investing in renewable energy right now could bring you spectacular gains, and we'll show you just how to do it...

Alternative energy has substantial advantages over traditional energy sources like oil, coal, and natural gas. Renewable energy is not only limitless, it's also free.

However, it's always been much more expensive than old energy sources, until now...

The UN's "Global Trends in Renewable Energy Investment 2017" shows the costs of renewable energy sources are dropping. Alternative energy costs fell 10% this year alone. And a report from Bloomberg last April showed solar energy costs have been slashed to 1/150th of their 1970s prices.

A big reason for the falling costs of renewable energy is increased funding for these renewable sources. The UN report showed that investment in renewable energy capacity is double that of fossil fuel sources. And those cost-cutting investments are leading to more adoption of clean energy sources. 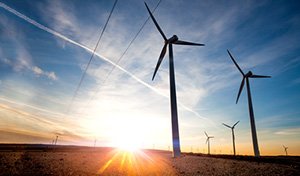 This combination of lowered costs and an endless supply of renewable sources is one of the main reasons the EIA expects alternative energy could turn into the United States' top energy source by 2040.

And investing in renewables could bring investors staggering wealth. Here is Moors' complete renewable energy investing strategy, including details on his top clean energy stock to invest in now...

Here's How to Make Alternative Energy Investing Lucrative in 2017