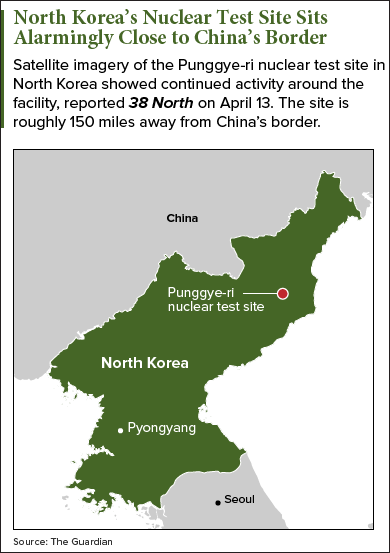 North Korea's nuclear test site is "primed and ready" for an atomic explosion that could happen in just two days.

And the country usually marks big holidays by pulling explosive weapons from its arms chest.

The company said on its website this morning that the latest photos of the Punggye-ri nuclear site show it is fully equipped to commence what would be the country's sixth nuclear test since 2006.

Meanwhile, South Korean officials are playing down speculation that a North Korea nuclear test is imminent...

"There has been no unusual activity so far," Roh Jae-chun, a spokesman for the South's Joint Chiefs of Staff, said this morning, according to The Guardian.

South Korea, as well as the United States and its United Nations (UN) allies, would be remiss if it once again miscalculates North Korea's nuclear threat...

Such was the case following a Feb. 11 missile launch from the "Hermit Dynasty" two days after President Donald Trump said that defending against North Korea's nuke and missile tests was a "very, very high priority."

But the Pentagon reduced that show of aggression down to a pesky fly buzzing in America's ear, claiming that it "did not pose a threat"...

Money Morning Executive Editor Bill Patalon has time and again called out the Pentagon for being so complacent about the escalating "Asian Arms Race."

You see, Patalon has covered Asia's various weapons programs for nearly three decades now while looking for opportunities for investors in the defense sector.

And he's adamant that neither investors -- nor the world's politicians -- should mistake North Korea for a child playing with its toys...

In a recent article for Private Briefing, Patalon explained to subscribers just how disturbed he was by the U.S. government's ability to be so shocked by North Korea's advancements.

Editor's Note: Since 2011, Bill Patalon's Private Briefing investment service has given readers 217 double- and triple-digit winners. To subscribe and get Patalon's next pick, click here...

You see, in the aforementioned Feb. 11 missile test, Pyongyang had added what appeared to be hypersonic weapons to its cache. These weapons can deliver nukes far more accurately than typical intercontinental ballistic missiles (ICBMs). And they can be launched from either land or sea.

"Washington can't afford to be so complacent," Patalon wrote.

He also pointed out that "these missile tests are occurring with increasing frequency."

In the last five years alone, North Korea has either launched or attempted to launch 92 ICBMs, including 19 in each of the last two years.

"There's almost a sense that 'these guys keep test-launching missiles - but they still don't have the technology or the range to hit the Mainland U.S.," Patalon explained.

But waiting for such a development to come to fruition could prove deadly to the United States.

After all, we know that North Korea also has nuclear capabilities, including hydrogen bomb technology.

H-bombs magnify what would be an "ordinary" atomic bomb's explosive power by a thousand.

All Pyongyang needs to do now is put two and two together...

Once the country figures out how launch a missile - such as a hypersonic ICBM or submarine-launched ballistic missiles (SLBMs) - with an attached bomb, it will be too late to put a stop to Pyongyang's menace.

Again, Uncle Sam really can't afford to be so complacent.

And, slowly but surely, this dismissive attitude does seem to be changing...

The president also managed to turn China - North Korea's most powerful ally - against the Hermit Kingdom as well.

On April 11, following a phone call and a tweet storm from President Trump, Beijing agreed to threaten financial sanctions against Pyongyang if the country continued to test its weapons.

We'll know Saturday if China's threat had any real impact.

But judging by today's news that North Korea's nuclear test sites are "primed and ready" for a new trial run, we're already guessing it didn't.