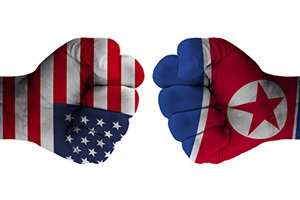 Till this date US is the only country which has used atomic weapen on unarmed humanity , not once but twice. One should worry more about US than North Korea
GV

Maybe you should move to a protected country. If you live in the USA you should be glad we did or you may be a speck of dust never born.
Daddymac

Ok! Lets get real hear. 1st off. Trump is in his own right obviously to defend his mainland U.S.A. This would not surprise me if the Chinese set a trap. (One must remember that the entire world wants the U.S. currency to be destroyed). This is why i firmly believe that in the South China sea. U.S. military should flank the Chinese And Japanese mitary. With eyes from the outside.

No matter what. So many hate Trump with a smile as his knowledge and no how of running a country is bleek. Honestly! It is. He is on a path to learn who is his allies in house and who is his enemies in house. Democrats are out yo do anything to mislead the man. I firmly believe that his decisions are justified and I believe Trump is utilyzing his power to prove to others he is not aat to just walk over. His brilliance is in his forsight. He deserves the chance and the right to continue his muscle as for you americans. You finally have a man that is there truthfully for his own country. Theres a lot on his plate. His decision to end North Korea nuclear program is a necessary event that must take place as Kim Jong has reached a level of power that he believes within himself to be a calling. He has created this over the years as a master plan that involves Asia itself to stand beside him against the U.S.. Hence why I say. Watch from a far. Keep closer eyes on China and Japan.

Think China as the puppet master and Kim Jong-un and North Corea as China's test field for their ambitious plans to rule the South China Sea and become the new emperor and leader after the USA
China is already immensely powerful and they see how we crumble facing the Medina attack machine. So what can go wrong for them by continuing their dirty chess game using the North Corea as their pawn? until they feel that they are strong enuf to call Checkmate

Interesting: The U.S. sold scrap metal to Japan that was recycled and used in aircraft to attack at Pearl. Both political parties were responsible by tax code and law to encourage manufacturing to leave and have China cash their U.S. Treasury notes to build infrastructure and military. Meanwhile here at home there is the "trickle up" economy. Yes, I am a veteran. Tell me more. I certainly would like to know what is happening.